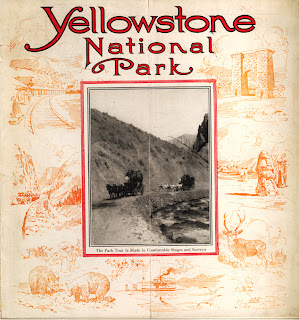 In previous posts I've been sharing some of my collection of Yellowstone National Park memorabilia. Thanks to all of you who stopped by to take a look at those posts and for all the kind comments.

The question might occur as to how, back in the early 1900s, folks found out about Yellowstone and how to visit the Park. The railroads did a great job of advertising YNP and published some (for their time) pretty spectacular brochures such as the one  pictured above, or the one below, published by the Union Pacific Railroad. (Most of the images below can be viewed in a larger format by clicking on them.)

They also had professional photographers go out and put together photos that could be used in a sort of slideshow presentation. The presentations occurred around the country. As you read further below, I'll show you some of the slides used and supplement that with some vintage postcards from the same era.  Early presentations were done with the use of lantern slides which are large glass slides, appx. 3 x 4 inches. Of course this was way before electric projectors and so they used something called a magic lantern to project the slides. These slides are fairly rare today, especially ones in good shape and not broken. The slide show might consist of a set of 100 slides.

Perhaps they would start the show with a map of the Park to explain it's size and how you could spend 7 days or so going around and seeing most of it. Most likely the way you would get to the park would be on a train so this whole process worked well for the railroads. Notice the logo for Union Pacific Railroad. (For those of you not into railroading, the main passenger railroad in America today is AMTRAK, which took over most passenger rail service in the US in 1971. The Union Pacific continues to exist today as a major freight carrier.) 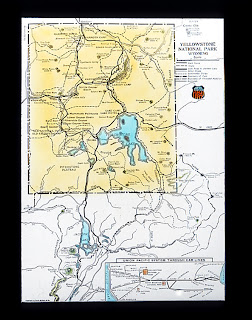 Here is a lantern slide on the light table. The round spot is a quarter I placed there so you can get a good idea of the size of the slide. 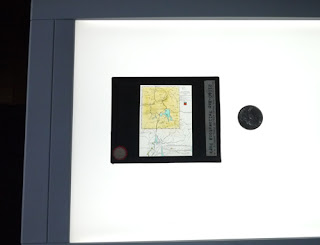 After showing the map, perhaps the presentation would show a picture of the train arriving at the Gardiner, Montana, depot. For just about any tourist of the day, this would be the end of a multi-day train trip. 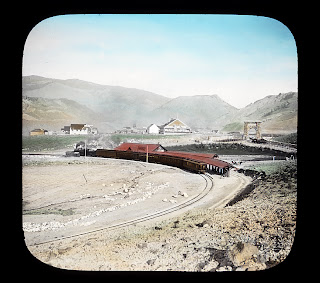 Click on the slides for a larger view
We would probably be shown this photo of the Roosevelt Arch at the north entrance to the Park. I featured some info about the arch in an earlier post. It was constructed in 1903 and consists of lava stones. 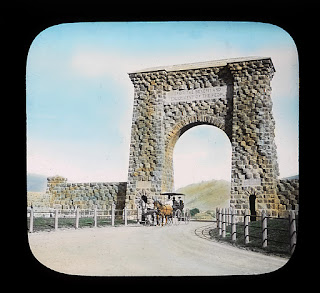 A similar scene could be seen on a postcard, like this one (note the date is somewhat later as we see the car) ... 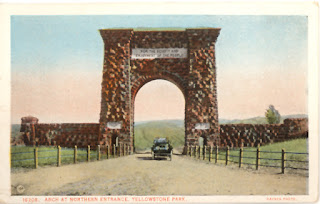 Click on above for larger view.
The next slide might show where we are headed for the first night's stay, the Mammoth Hot Springs Hotel. It was advertised as comfortable and elegant. 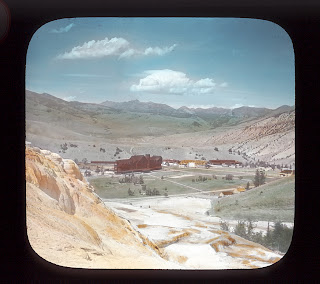 Here are some close ups of the hotel and the hot springs as they were pictured on vintage postcards. 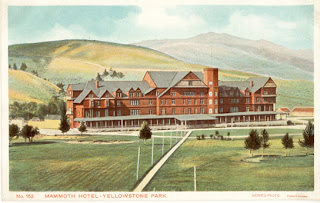 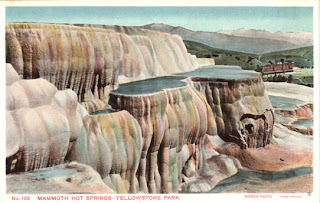 And, after you were in the Park, you might fill out a card that would allow an invitation to visit to go out to others ... 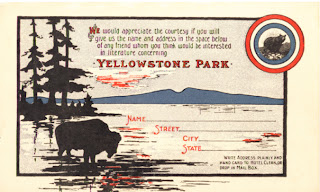 Getting back to our coach ride, along the way to the Hotel, we would pass Eagle's Nest. Although the nest is no longer there today, at the time it was at the top of the column of rocks near the upper center of the photo below ... 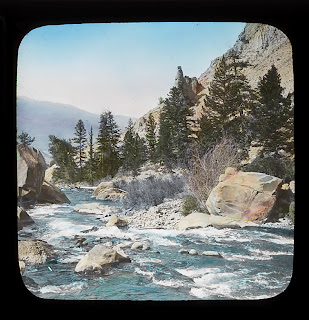 Here's a postcard showing an eagle approaching the nest ... 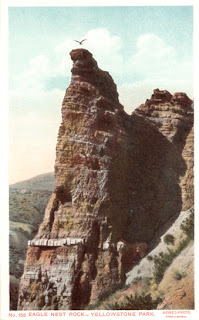 After spending the first night in the hotel, your guide would possibly show you the wonders of the giant hot springs created over thousands of years with hot water and minerals coming out of the ground. 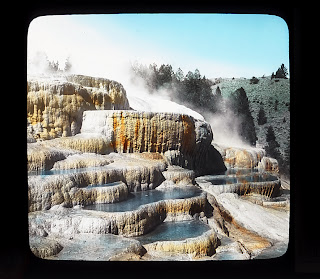 As you start your journey on the second day your stagecoach will carry you through the Golden Gate. 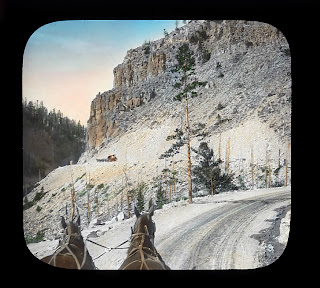 Perhaps you will see some Buffalo. 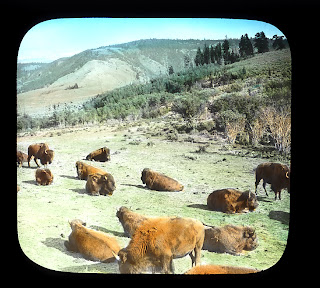 And, of course, you will want to join the other tourists to take a closer look at the geyser basins to see the wonders up close! 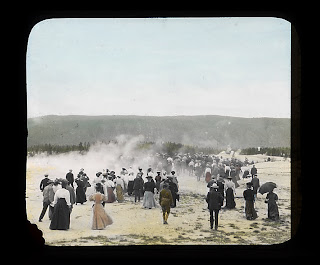 While in the Park you might take time to send a postcard to a friend. The card below was postmarked Yellowstone Park Wyo, June 28, 1902. All that was required for the address:  a name, city and state. In the message, the writer says that a large party of Shriners has just started off on their tour of the Park in ten coaches. A note in top right corner indicates the card was written at Mammoth Hot Springs Hotel, North Edge of Park, June 27, 1902. Wonder how long it took for the card to get to Grand Rapids?

At the end of the day it's time for a big campfire. How they did that without setting the Park ablaze, I don't know, but this picture sure looks inviting. 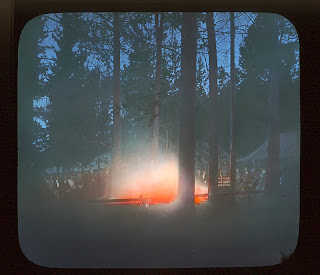 Some nights were apparently spent in the (rather luxurious) hotels while others might be spent in tents. Here is how the camping was portrayed on the vintage cards ... 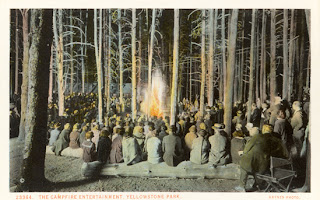 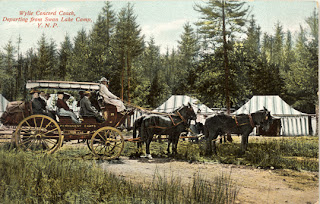 A brochure we might have seen would entice us to the camping feature ... 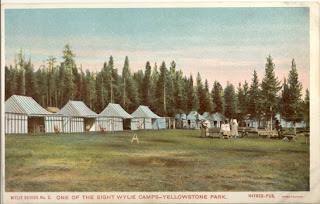 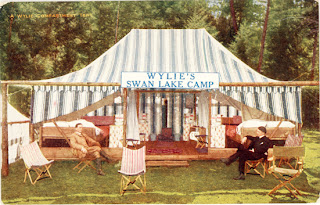 Thanks for stopping by John's Island. Anything that ends up here on the Island is simply something that interests me and perhaps you will find it to be the same. Your comments are welcome and appreciated.
at May 05, 2011