This little book is a favorite in our collection.

Below is typical content, in this case, the Monarch Butterfly. Each entry has a description and illustration.


We could not find any definitive information on who drew the illustrations. We believe they were done by Fazzini. There are 64 butterflies/moths described in this "field guide" type of publication. Fazzini also published a similar book, Indians of America, featured in our post of December 16, 2014.

"The study of butterflies and moths is a pastime that soon becomes a hobby with most of us ..." Fazzini begins the Preface with that statement. The Preface provides her reasons for publishing the book.


See more interesting critters at Saturday's Critters #163 and thanks to Eileen for hosting!

A Postcard for the Weekend

The theme for Postcards for the Weekend #22 is "Anything you wish" and, so, we thought you might enjoy this view of the air-conditioned deluxe coach, with seats that rotate and recline, aboard the  Erie Limited. The back of the postcard says, "One charming vista after another greets the eye of the traveler on the Erie between New York and Chicago over the scenic route of the East. Published by the Erie Railroad, probably early 1930s. See more interesting postcards at Postcards for the Weekend and thanks to Maria for hosting! 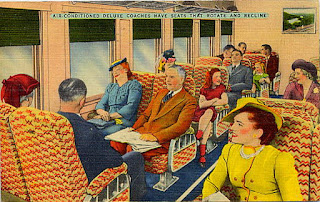 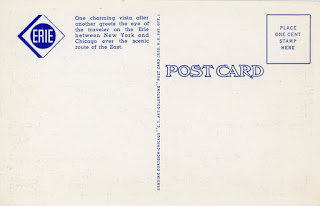 
Don't miss all the interesting sky photos at this week's Skywatch Friday. Thanks, Yogi♪♪♪, for hosting!

The largest fish processing vessel operating in the United States is the SS Ocean Phoenix, we spotted January 23rd. This vessel has an interesting history as described on it's webpage (see a screen capture below).

Closing thought ...
It only takes 1 tree to make a thousand matches
It only takes 1 match to burn a thousand trees
Found on the back of a box of England's Glory matches.
(Submitted by Richard, our friend from the UK. Thank you, Richard!)

"USCGC Healy (WAGB-20) is the United States' largest and most technologically advanced icebreaker. She is classified as a medium icebreaker by the U.S. Coast Guard. She is homeported in Seattle, Washington and was commissioned in 1999. On September 5, 2015, USCGC Healy became the first unaccompanied United States surface vessel to reach the North Pole. The current Commanding Officer is Captain Jason Hamilton. Captain Hamilton assumed command of Healy in May, 2015."  Wikipedia


Below, fishing vessel Arctic Storm just after sunset on Wednesday, January 11th.  More info on this ship is here.

Skywatch this past week ...


Linking up to Skywatch Friday with thanks to the hosts Yogi, Sandy, and Sylvia! Checkout Skywatch for lots of neat sky photos!


Postcards for the Weekend ...

This week's theme at Postcards for the Weekend is "Transportation -- Other than trains or trams." Here are a couple of old cards from our collection featuring transportation in and around Yellowstone National Park by stagecoach. Check out PFTW for more neat postcards and thanks to Maria for hosting!

The card below documents some interesting history for those interested in Yellowstone. The card is a real photograph made into a postcard. At lower right there is a line of printing: "Gov. B Odell and party leaving Monida for Yellowstone Park." We did a search for "Gov B Odell" and found Benjamin Odell was the 34th Governor of New York State, serving 1901 - 1904. A little more searching revealed two mentions of his trip to Yellowstone in July, 1903, and thanks to the New York Times TimeMachine we can share the newspaper clips below the card. In 1903 the primary way for tourists to visit YNP was via railroad to a stop near the Park and then into and through the Park via stagecoach.

One more card shows a coach rolling through the Park.

Welcome to John's Island in 2017, our 7th year in the blogosphere. Thank you so much to all of you who left us the New Year's greetings and other comments on our last post.

The skies around Seattle are getting off to an interesting start for the new year. After clouds created a beautiful sunset on the first, we've had a blast of cold, clear air that has created its own kind of beauty.


We are linking up with Skywatch Friday where many bloggers share their sky photos. Well worth checking out and thanks to Yogi♪♪♪ for hosting the linkup!

The theme this week at Maria's Postcards for the Weekend is "trains/trams". Trains make up one of the largest categories of old postcards in our collection, so we were delighted to see this theme. Thanks to Maria for hosting the linkup!

We found it interesting the way the sender wrote over the image on the postcard. With vintage postcards it's not so common to see writing on the image but it captured our attention here. However, all we can read is Best Regards my "??? ???" R.C.W.  Can you make out the question marks?

In postal history, Private Mailing Cards lasted for a relatively short time, 1898 - 1901. Here is a little history from the Smithsonian Institution Archives -- "On May 19, 1898, Congress passed an act allowing private printing companies to produce postcards with the statement 'Private Mailing Card, Authorized by Act of Congress of May 19, 1898.' [Prior to this Act only the government could produce postcards.] The words 'Private Mailing Card' distinguished privately printed cards from government printed cards.  Messages were not allowed on the address side of the private mailing cards, as indicated by the words 'This side is exclusively for the Address,' or slight variations of this phrase. However, if the front of the postcard did not contain an image, it could bear a message. If the front did have an image, then a small space was left on the front for a message. Many of the private mailing cards also contained the phrase 'Postal Card—Carte Postale,' which indicated that it was allowed to enter the international mail system." Just about all of that history is illustrated on our card above.

On this card, mailed in 1913, we are hoping some of our followers can help us translate the message portion. It is definitely a foreign language, but we are not sure which one. Can you help?

Well, sort of. Although some have said the new political agenda is to make it 1950 again in the USA, we are talking about the CALENDAR.  Yes, 2017 is the same as 1950 when it comes to the calendar and the way the days are aligned. The evidence is in the image below, our 1950 wall calendar from one of the transcontinental railroads!

The company was the Chicago, Milwaukee, St Paul, and Pacific Railway, and the calendar was published in celebration of "Opening Our Second Century". As is fairly common with wall calendars, it showed three months at a time and the pages were to be torn off as the year progressed. Our favorite part of the calendar is the image at the top showing one of their passenger trains roaring down the tracks. These calendars are popular with collectors and it is fairly rare to find one in good condition with all the pages still intact.

Closing thought ...
There are three rules for writing a novel. Unfortunately, no one knows what they are.
W. Somerset Maugham