About my daily walks along the waterfront ... I've said it before ... Every day the steps are the same but the story is different. Since my last post I've watched the demise of a sailboat over a few days. Even others who walk-the-walk have asked if I know what happened. So, as much as I know is in the photos below. 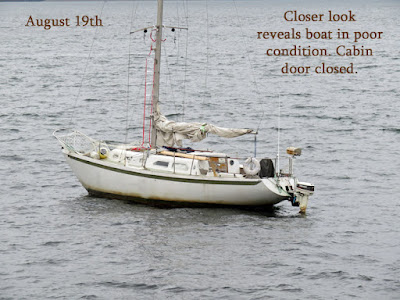 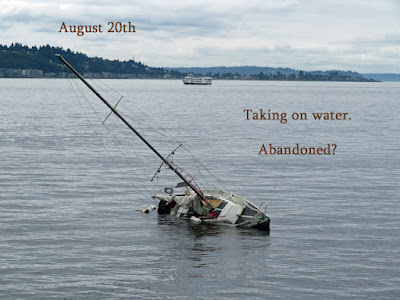 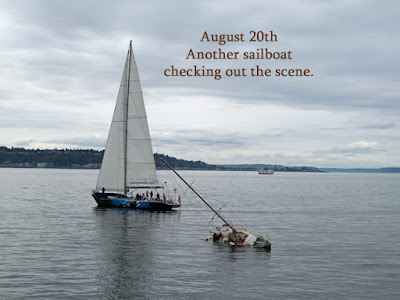 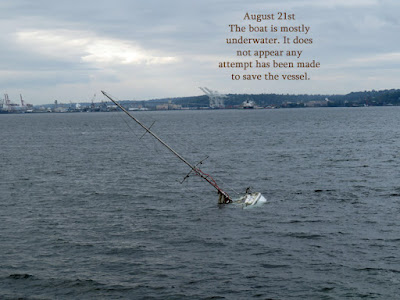 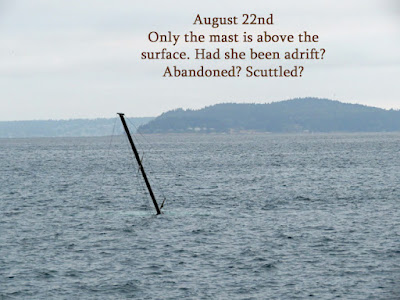 Other snaps along recent walks ...


Closing thought ...
Quote by a forest ranger at Yosemite National Park on why it is hard to design the perfect garbage bin to keep bears from breaking into it: "There is considerable overlap between the intelligence of the smartest bears and the dumbest tourists."

It's been a little over a year now since I placed two hummingbird feeders on my deck. My experience allows me to confirm this:  If you will keep your feeders clean, and keep the sugar-water fresh, you will, as time goes by, see more and more hummers visiting you.

During the Nieuw Amsterdam's second cruise of the season to Alaska a tragic event occurred. During a float plane tour of Misty Fjords National Monument, near Ketchikan, the de Haviland Beaver plane crashed killing all aboard ... the pilot and 5 passengers from the cruise ship. The next photo appeared in the media on Thursday, August 5. 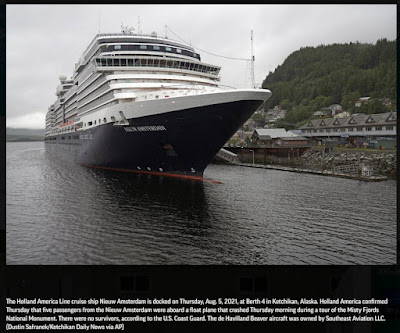 In the event you can't read the caption (too small) here it is ...  The Holland America Line cruise ship Nieuw Amsterdam is docked on Thursday, Aug. 5, 2021, at Berth 4 in Ketchikan, Alaska. Holland America confirmed Thursday that five passengers from the Nieuw Amsterdam were aboard a float plane that crashed Thursday morning during a tour of the Misty Fjords National Monument. There were no survivors, according to the U. S. Coast Guard. The de Haviland Beaver aircraft was owned by Southeast Aviation LLC. (Dustin Satranek/Ketchikan Daily News via AP).
On August 7, the Nieuw Amsterdam arrived back in Seattle. The photo below shows the ship docked at Pier 91. Out of respect for the situation the crew did not fly the celebration flags above the ship as cruise ships normally do when in port. 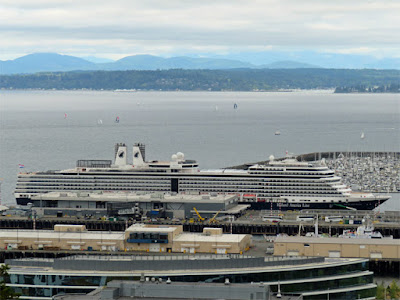 I asked Google ... Are raccoons aggresive? Answer:  It isn't uncommon for a healthy raccoon to be active in the daytime, but it's highly unusual for a raccoon to be aggressive toward a person. A female may boldly defend her young, arching her back and growling or giving a loud “whoof,” and perhaps lunging at a person she deems threatening.
For those of you who enjoy critter photos like I do, take a look over at Saturday's Critters. Eileen has posted some excellent photos she took around Kiwanis Lake in York, Pennsylvania. And, you can check out other blogs that link up with her.
Sky Snaps


Closing Thought ...
There is no light without shadow, just as there is no happiness without pain.
Isabel Allende
at August 13, 2021 19 comments: