Here it is the last day of 2015. Time to open up the music box and play the traditional tune.


Yes, that's our music box, yes, it's really old, and yes, it's a tradition to open it up and give it a spin on New Year's Eve here at the Island.

We'll close out the year with one final sunset ... This one from the Treasure State of Montana, taken yesterday, December 30th. If it looks COLD, you are RIGHT! But beautiful indeed. 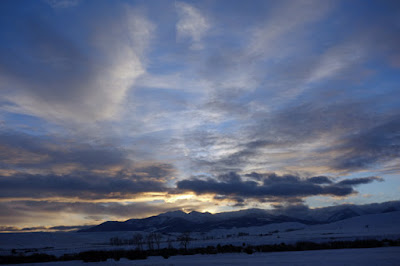 One more chorus of Auld Lang Syne and we're out of here! 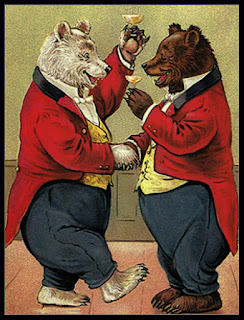 We collect vintage travel memorabilia, especially related to travel by train in the days way before AMTRAK took over passenger service in the USA. The time period that interests us is from about the late 1800s to 1950s. Train enthusiasts, aka "railfans", like to refer to their favorite "roads", short for railroads and/or rail line companies. Our favorite roads were the ones that served the Pacific Northwest, especially the Great Northern, Northern Pacific, and Milwaukee Road. It's common to find items we like from other than our favorite roads and today's item is an example.

Today's post features an item published by the Minneapolis, St. Paul and Sault Ste. Marie Railroad, which was a subsidary of the Canadian Pacific Railway, and nicknamed the SOO Line after the phonetic spelling of Sault. Wild Flowers of the Canadian Rockies was published sometime around 1910 by the SOO Line.  Here is the brochure ...


Do you enjoy wildflowers?
It appears the illustrations are hand drawn, especially the colored versions. Hand coloring of photos was common during this time.


At the time of publication of this brochure, color was just starting to be a part of the printing process. How do you like the format with the black and white on the left ... color on the right?

From our Yellowstone collection, a book by Aubrey Haines ...

Amazon lists this book as "Out of Print -- Limited Availability". It can be found in some libraries as shown in this link.

If you have been to Yellowstone, did you see the Chapel?

Other photos from around the web ...

Regardless of what you celebrate this time of year, best wishes from John's Island. Thank you for stopping by.
at December 25, 2015 10 comments: 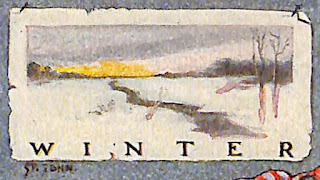 Celebrating the Season with one of our old cards ... 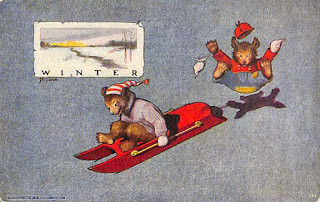 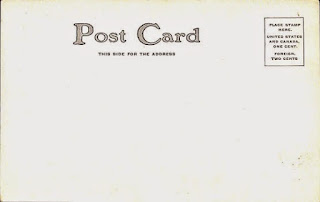 We've featured this old card before and still think it's the best for starting Winter. Copyright 1906 by O. Benedict, Chicago. Benedict did one of these cards for each of the seasons.

The drought in Seattle and Western Washington is officially over!


Fresh snow on the Olympic Mountains ... 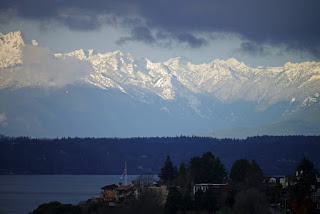 The photo above was taken on the morning of December 16th. There were dark clouds above us in Seattle but way over to the west the Olympic Mountains were in full sunshine.  Those mountains, about 50 miles distant, were almost clear of snow at the end of summer.

Let us be the first to wish you a fine Winter! Thanks for stopping by John's Island.

From our Yellowstone collection ...

Here is a little packet of 20 black and white miniature photos of Yellowstone National Park. These little packets were available at souvenir stands in the Park, as well as, for example, railroad stations for trains that served tourists going to the Park. We are guessing these photos are from the 1920s based on the automobiles in a couple of the pictures. Actual size of the pics is about 2 1/2 by 4 inches. Information on who actually took the photos and Bardell is scarce. A web search will find a few more sets of Bardell Miniatures on other locations such as Niagara Falls and San Francisco. Several of the pictures are marked © N.P.Ry.Co. That would be copyright by Northern Pacific Railway Company. The N.P. was one of the major railroads that served Yellowstone. Their closest depot to the Park was in Gardiner, Montana at the Northern Entrance. The Official Photographer for the Park during this time was F. J. Haynes. He also did a lot of work for the N.P. Railway and may have been the photographer on some of these pictures.

Next photo:  Do you know the story behind "Fishing Cone"? Back in the early part of the 1900s a fisher person could stand on the edge of this hot spring and, once catching a fish in Lake Yellowstone, could swing around and cook the fish in the boiling water in the cone. The cone is still there today, but, of course, they will not let you walk out on it ... too dangerous they say.


Above picture:  The Park bears are still one of the great attractions of the Park. Yes, tourists actually used to feed the bears! The Rangers will not let you do that now. They say it is dangerous and it is not good for the bears to be hooked on human food.

Photo below:  In the early 1900s there were several business in the Park called Camping Companies. They set up tents at various locations around the Park and many tourists stayed in the Camps instead of in the more expensive hotels. The Camping Companies arranged tours and would take you around the Park in about 4 or 5 days ... stopping at a different camp each night.

Photo below:  Do you know the story about Handkerchief Pool?  Here is what the Yellowstone Park website says:  "One hundred years ago, one of the most famous attractions in Yellowstone was a small spring called Handkerchief Pool. Visitors threw dirty handkerchiefs into the water. The cloths were sucked into the depths, only to emerge a few minutes later, considerably cleaner. Other objects were also thrown into the hot spring, including coins, broken bottles, rocks, hair pins, and a small horseshoe. The plumbing system of Handkerchief Pool was damaged and eventually the spring became dormant. Today this hot spring has nearly been forgotten." You never know what you can learn on John's Island.

Although I've shared a multitude of photos from my daily waterfront walks, I don't recall mentioning the trail goes through Seattle... 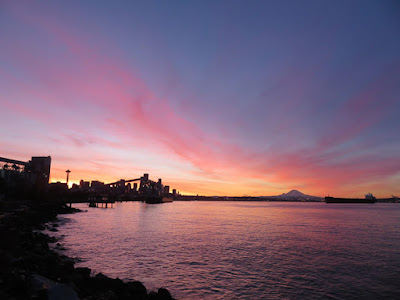