Linking up this post with Eileen's Saturday's Critters. Thanks, Eileen, for hosting!

In 2010, prior to starting this blog, I traveled with brother Chris to Mexico to visit the small town of Ajijic on Lake Chipala.

Ajijic is situated on the north shore of Lake Chapala, surrounded by mountains and enjoys a moderate climate year-round. The population of Ajijic was 10,509 as of the 2010 census. It is home to many expats from USA and Canada.

During our week long visit we stayed in a little hotel with rooms arranged around a courtyard. While snapping a photo of the courtyard I was surprised to notice a nest in one of the trees and near the nest was a hummingbird feeder. I don't know which came first ... the nest or the feeder. 😊 During the days of our stay I was able to get a few photos of the mother hummer and the nest with eggs. 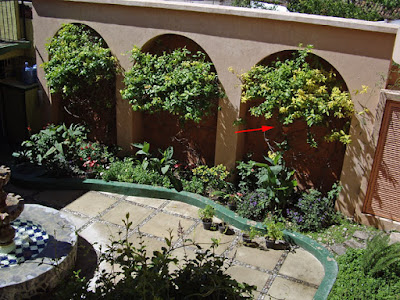 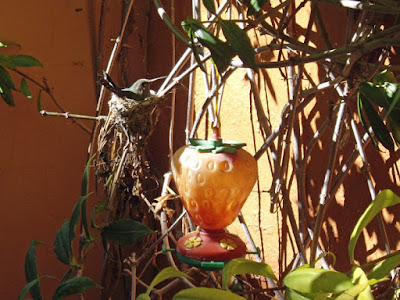 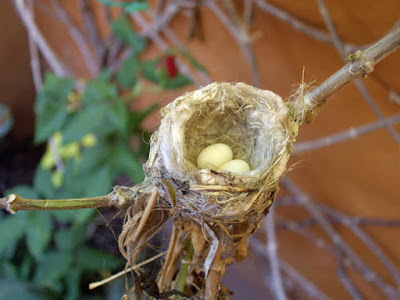 Before arriving in Ajijic we had heard that it was a winter home to hummers and that we might see a lot of the little birds. We read about a lady who had a sort of hummingbird oasis, with lots of feeders, and dozens of hummers feeding. A 2010 blog post by Jim Cook, a resident of Ajijic, featured Flossie, known as the Hummingbird Lady of Lake Chipala. We asked locals about her and, the answer was, oh yes, she has lots of hummers and even welcomes human visitors too. So we set out to take a look for ourselves.

Flossie was well known for providing what seemed like an oasis for hummingbirds with dozens of feeders. Fortunately we found her and spent an hour or so chatting with her as she showed us around her home. Chris wrote up the whole story and posted it online. His blog no longer exists but he did find the article he wrote and forwarded it to me for this post. Here is what he wrote in 2010 ...

Near the shores of Lake Chapala, in the village of Ajijic, at the corner where Independicia meets Morelos, on a simple bluish wall, stapled to a wooden door, a handwritten note says “Hummingbirds Before 2PM Thanks –F”.

The "F" is Flossie, who lives behind this wall in a small house with a big garden--sharing the space and her time with hundreds of hummingbirds.

One hummingbird is interesting. Dozens of hummingbirds feeding in a confined space is mesmerizing. The sound is surprising--an intense thrumming, maybe amplified by reflecting off the walls of the house. It is almost impossible not to exclaim and point when you see an interesting variety, but Flossie quickly tells you the first rule of hummingbird watching: no pointing, it sends the birds away. The birds themselves are in constant motion--exuding busyness and hurry, but somehow it is also hypnotic and soothing.

Supporting the birds and the garden takes the dedication of a monk. Everyday Flossie fills 15 feeders (sometimes more, sometimes less) with sugar water. Nightly she covers each feeder with plastic to keep the bats away. Regularly all of the feeders must be cleaned with a bit of bleach to kill the persistent mold and that means numerous rinses using standards she has developed to ensure no harm comes to the birds. When she is in "full production” Flossie’s garden is home to between 200 and 300  hummingbirds.There are several varieties that visit this area and Flossie can point all of them out. But Flossie does more than this. She knows individual birds; she points out one with a damaged tongue, permanently extended and explains how hummingbirds drink, not by sucking, but by using this long tongue to lap up the liquid.

And then there is the garden--a full time job in itself. The lot stretches from Calle Independicia almost to the shores of the lake and every inch is filled with fruits and vegetables. There is a salad garden and bananas and papayas and mangos and varieties of guava and many others. The garden provides much of what she eats and she tries to trade or give away  the rest. She manages all of this with the help of a gardener (two hours a week)  and her dog Ladee who never leaves her side unless she  needs to chase a cat out of the yard.

Right now she is doing all of this with a cane because she had knee replacement surgery in the fall back in the US. Why not Mexico? She doesn't have insurance and by her own admission she lives "below the poverty line, at least by US standards." She was feeling a "little dizzy" the day we visited, but that did not keep her from showing us from one end of the garden to the other.

She doesn't own this property. "I don't own anything, I rent it from a rich man who lives in Mexico City, one day he will tear it down and build a nice house here." What does her family think of her living here in Mexico by herself? "Oh, they think I am nuts. One even says that I should move back to live with them."

I would not bet on that happening anytime soon. Flossie has been in Mexico for almost 20 years. When her second husband died she had almost no money, but she followed the path of the hummingbirds driving south looking for warmer weather and easier living--eventually landing in Mexico.

If you want a conventional approach you can find it right around the corner where retirees with savings accounts and pension plans feast on some of the best food anywhere. But Flossie copes only with social security and no other benefits and uses a lot of that to feed her hummingbirds. She has survived on very little, has had to work hard and be creative to make ends meet, but at the end she has carved out a niche in life that many would envy.

It is obvious that living alone at 77, managing a house and a huge garden with a new knee can be challenging. The details may be hard to keep up with and there is evidence of undone work inside and outside her house. But she paints her life with broad, beautiful strokes and in the end what makes a better picture?

It is risky to make too many generalizations from a single a life. For every adventurous life lived like Flossie's there are probably a dozen counter examples of disaster that come from not following the conventional route. At one time before arriving in Mexico she lived in her car. Her story is one of struggle, yet it draws you in and challenges you with a life well lived.

The Audubon Society of Ajijic brings regular tours and she hosts individuals and school groups. Flossie accepts contributions now to help with purchasing the supplies and equipment necessary to feed the birds. In the summer she feeds three gallons of sugar water a day!  If you are a photographer she will position you where you can get the best shots and world class photographers have captured Flossie's hummingbirds on film.

And you can visit her yourself, most days, before 2pm. But the house is easy to miss—you have to be patient and look closely. For two days I parked directly in front of her door without a clue that the Hummingbird Lady lived just beyond the wall.

She followed us out the front gate and into the street with the admission that she doesn't get as much chance to talk to people as she would like and she seems reluctant to let us go. I am reluctant also, but I need to go and reconsider my own flight plan.

Flossie got some recognition for her effort--here is a post published by Jim Cook on his blog, Jim & Carole's Mexico Adventures. If you take a look at Jim's post, dated January 5, 2013, you can also see a comment by Flossie's daughter, posted on November 16, 2016, with an update on Flossie.

Today's Version of Flossie - Must See

Thank you for stopping by John's Island

Thank you for stopping by. 😊 Take care and stay safe!