As time rolls by we find ourselves confronted with the question: What are we going to put on the blog? Something from the postcard collection? Vintage travel memorabilia? Or, perhaps other things that interest us will provide some offerings. So, here's an assortment of images captured earlier this month ...

Our local icon, the Space Needle, with flag at half staff, evoked unsettling memories on September 11th ...
In the northern hemisphere bloggers are going to be posting lots of photos of the colorful changes in the trees as we move into the Fall season. We're no exception. Mid-month we noticed this tree, a Japanese Maple, leaves at the ends of the top branches turning red ... such a contrast with the blue, blue sky ...

More recently, we snapped the pic below. Have you ever tried to capture that look of the sun shining through the colorful leaves? It isn't so easy, and we don't claim to have done it here. But maybe a little bit ...
Skies are a continuous fascination. Sometimes the haze, clouds, and sun combine to create dramatic views of the mountains ...
Mostly clear sky, except for one patch of clouds, right after sunset ...
Crescent moon dropping down in the sky shortly after sunset ...
West Seattle is about 2 miles away in this view from our deck ...
Sunsets! We can't resist them ...
We like the layers of mountains in this one ... waterfront, foot hills, Olympics in the distance ...
More recent sunsets. The sun is setting almost due west, these days, and sometimes creates a nice silhouette of mountain tops ...
The next evening, we were part of the one hundred million or so watching the debate on the 26th, and honestly, it was not hard at all to leave it behind and step out on the deck to snap a few sunset pictures. It changed a lot as time passed, but we liked the shot below where some clouds were just at the right height to make interesting reflections ...
The mountain peaks on the right side are the Two Brothers, in the Olympic Range ... we've featured them in previous posts ...
Below, night and day ... First, night: Not really "sharp" but this image does convey a bit of the feeling ... Full Harvest Moon, a couple hours before moonset, a nice moonlight glow on Puget Sound ...
And day: Clouds seem to confirm the changes as we move into Fall ...
One last "sky" photo ... A singular cumulonimbus cloud way over the Sound to the south ... the surrounding sky was mostly clear, making this seem so unusual ...
Our regular followers will know we simply can't resist snapping the flowers that catch our attention on our walks.
These things looked so colorful, but we didn't know exactly WHAT they were. So, we put this image into Google Images search field, hit the SEARCH button, and immediately discovered they are rose hips. Have you ever searched by image on Google?
Another flower we had to put into Google to ID. This time our photo yielded a long, long page of blue flowers but none looked exactly like ours. So, we tried using the "web" search, instead of "images", and put in "blue flower petals have 5 points" and bingo! Chicory and even the scientific name! We like it!
Had to throw this one in ... can you image a human trying to construct this web? That little spider does it with perfection.

We like to include a few maritime snaps for friends who enjoy them ...

With the shorter days of September, cruise ships, which usually arrive around 5:30 AM, have been arriving in the dark. In the photo below, you see a Washington State Ferry on the left and a cruise ship arriving on the right. The Ferry plies between Seattle and Bainbridge Island to the west, and is probably its first run of the morning. The cruise ship is the Norwegian Pearl ...

In the image below, the colors of the trees around the Marina signal Fall. Besides some pleasure craft, you see an Alaska Maritime tug and barge. The barges are usually loaded up with containers transporting goods to and from Seattle and Alaskan ports. We have to wonder what it's like to be in that tug for several days moving along at about 7 knots. Seven knots is about eight miles per hour.
Close up of Holland America's Zaandam after it arrived at the Cruise Terminal. All of Holland America's ships' names end with "dam" ... we could explain it here but it would take a while. Google it if you are curious. :-)
Sailboat out on the Sound in mid-afternoon ... millions of sparkles on the water ... 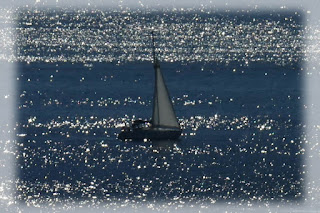 Curiosity frequently leads to grabbing the camera. Mid afternoon on the 27th we spotted the ship below heading northbound in the Sound. Pulled up VesselFinder.com and noted the identity as "U S Government Vessel".  Ok, well, which one? :-) Yes, we realize keeping the identity and location of military ships restricted might be important. However, recalling media accounts of an aircraft carrier arriving at Bremerton over a month ago, looked it up, and found this quote on Wiki: "The USS Stennis departed Bremerton at about 4:30 September 27, 2016, heading toward Seattle." So, there you go ... it's CVN 74, USS John C. Stennis, enroute somewhere ...  Now, keep in mind the ship is about 4 miles away from us ... looks small, doesn't it ... Overall length of deck: 1,092 feet (332.8 m) ... by the way, CV is the designation for all aircraft carriers, and the suffix N indicates that it is nuclear powered ... 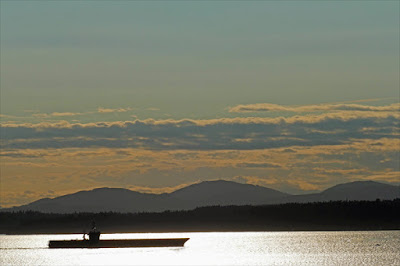 Now, as for old postcards, here is one we almost forgot about ... We wanted to include it on the last day of summer ... well, it hasn't been that long ago, so here it is. Old fashioned sweetness. How do you like it?
Lastly, something different (for John's Island, at least) ... You know, some folks like to travel all the time. We enjoy traveling once in a while, but we sure don't need it all the time. We recently found the little poem below and enjoyed it so much we thought we should share it with you!

How agreeable it is not to be touring Italy this summer,
wandering her cities and ascending her torrid hilltowns.
How much better to cruise these local, familiar streets,
fully grasping the meaning of every roadsign and billboard
and all the sudden hand gestures of my compatriots.

There are no abbeys here, no crumbling frescoes or famous
domes and there is no need to memorize a succession
of kings or tour the dripping corners of a dungeon.
No need to stand around a sarcophagus, see Napoleon's
little bed on Elba, or view the bones of a saint under glass.

How much better to command the simple precinct of home
than be dwarfed by pillar, arch, and basilica.
Why hide my head in phrase books and wrinkled maps?
Why feed scenery into a hungry, one-eyes camera
eager to eat the world one monument at a time?

Instead of slouching in a café ignorant of the word for ice,
I will head down to the coffee shop and the waitress
known as Dot. I will slide into the flow of the morning
paper, all language barriers down,
rivers of idiom running freely, eggs over easy on the way.

And after breakfast, I will not have to find someone
willing to photograph me with my arm around the owner.
I will not puzzle over the bill or record in a journal
what I had to eat and how the sun came in the window.
It is enough to climb back into the car

as if it were the great car of English itself
and sounding my loud vernacular horn, speed off
down a road that will never lead to Rome, not even Bologna.

Email ThisBlogThis!Share to TwitterShare to FacebookShare to Pinterest
Labels: Skies 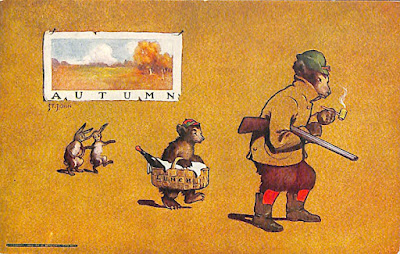 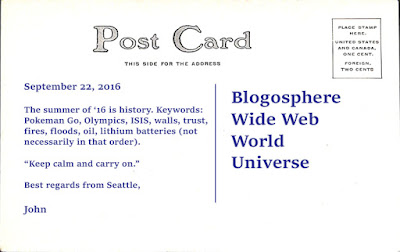 Today's old postcard is one of a series of images copyrighted by S S Porter in 1906, featuring the change of seasons. The Autumn season begins today, September 22nd, at 7:21 AM PDT. The message we added to the back is all virtual, the card itself is still unused. We have featured this card on previous Autumnal equinoxes. The more things change, the more they stay the same, as someone once said.

All you want to know, and perhaps more, about the September Equinox, thanks to timeanddate.com is here. Enjoy!

Wishing you and yours a fine Fall season.

Email ThisBlogThis!Share to TwitterShare to FacebookShare to Pinterest
Labels: Nature

On Saturday, August 27th, we took a cab for the short ride from home to Seattle's Cruise Terminal at Pier 91 to board Holland America's Westerdam. The highlight of the trip was to see the glaciers in Glacier Bay National Park, Alaska. Here are a few photos from our journey (except the first one which we snapped a couple of weeks earlier).

Read more about Margarie Glacier here. Thanks for going along with us on the trip. We will cover some additional highlights in future posts.
at September 17, 2016 17 comments: