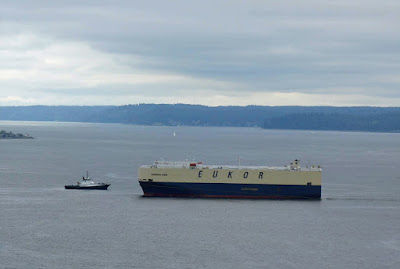 Although it appears the two vessels are about to run into each other, perspective at this distance belies that the Foss tug is meeting the Eukor for careful assistance to its berth in the Port. We love ships of all kinds but this one is a fairly new type of vessel to us and we had to do some online research.

First of all, Eukor is one of the world's largest shipping companies specializing in transporting cars and other rolling vehicles. On Eukor's website you will see a list of over 65 maritime vessels. Most vessels can carry hundreds of cars. The Morning Ninni is the one in our photo and here is a better close up from the web ... 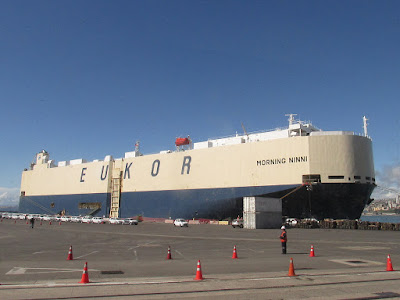 At a distance this vessel looks like a box floating on the sea. We found a fascinating video on their site showing how cars are loaded onto the ship ... take a look here.  It is the video on the left side of the page, called "Loading and Lashing operation of Cars"

An overview of Eukor is here.

If you enjoy ships and shipping, what do you think about car carriers?  Thanks for stopping by John's Island.
at May 29, 2015 14 comments:

Railroad/train enthusiasts who collect related memorabilia are frequently searching for a calendar to add to their collection. Railroads, in the early to mid-1900s, often published yearly calendars which were given to customers and agents. The intent was not only to provide a useful reference but to put a piece of advertising on walls and keep the railroad in customer's minds. Some of the calendars were elaborate, for their time, including a picture or some art on each month's page. Some provided just one illustration that became the "calendar top" and then the monthly calendar pages below were torn off as the year progressed. In the early 1960s the "Milwaukee Road" [technically the Chicago, Milwaukee, St. Paul, and Pacific railway] published a calendar and used the image below of their premier train, The Olympian, for the top. 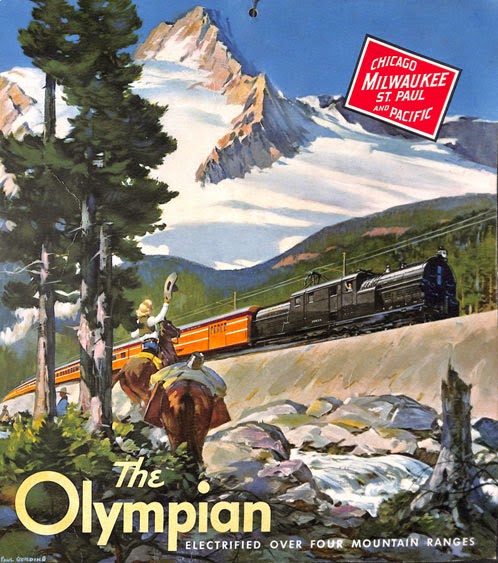 In the days before AMTRAK, railroads that provided passenger service all had "name trains". For example, you may heard of the Coast Starlight, The Empire Builder, the Sunset Limited, or the Southwest Chief. (The names, sometimes were retained by AMTRAK after they took over almost all passenger service in the USA in 1970.)

The Milwaukee Road's Olympian was unusual because it was operated electrically for large segments of its transcontinental run between Chicago and Seattle/Tacoma. In the image above The Olympian is traveling through a mountainous region, probably the Cascade Mountains. A specially designed electric locomotive, known as a Bi-Polar, was the power for this region of the country. The railroad touted the advantages of the Bi-Polar as being powerful, quiet, and smoke-free. Today, in retrospect, it seems they were simply ahead of their time. In any event, the art work on this image is one of our favorites. The artist was Paul Gerding who was known for his illustration work.

We're estimating this unused card to be from the early 1920s. 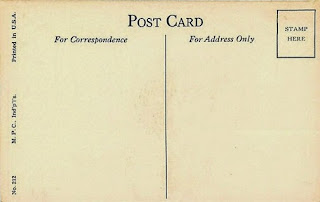 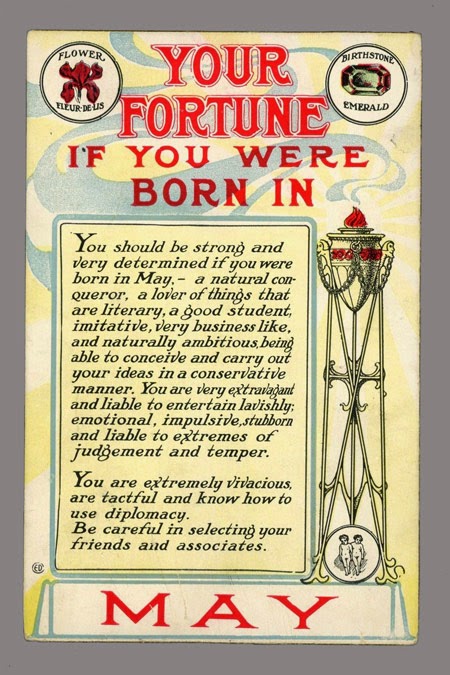 Now, we're just sharing old postcards, so don't take offense if you don't like your fortune. On the other hand, if you think it's right-on let us know!

We like the flower and birthstone at the top. Do you know the flower Fleur de lis? We had to look it up and found this online:   The English translation of "fleur-de-lis" (sometimes spelled "fleur-de-lys") is "flower of the lily." 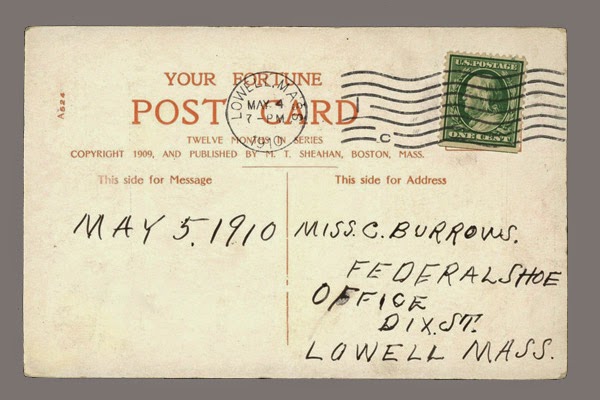