Report from the Emerald City ...

For those of you not into football, here's the story:  This weekend the NFL's 49th Superbowl will be played on Sunday. Our home town team, the Seahawks, will play against the New England Patriots. In football rules, a team can have only 11 players on the field at one time. Seattle's fans have become known as the 12th player ... in the stands, cheering them on. Folks who are into football here love this, others may find it crazy. All around the city the 12s are showing their support for the team in the big game. The Seahawks were winner's in last year's game. Can they do it two years in a row?

To capture a large part of the sky we took lots of single shots and combined them into panoramas. Yes, some cameras, including ours, will create them for you automatically. We still like doing it manually with some software. The software tries really hard to put a 3-dimensional scene into a 2-dimensional image and presents you with a result that may look strange. Not filling in the edges or cropping ... well, some like it and some don't. How about you?


Linking up today with SkyWatch Friday.. Thanks to the SkyWatch hosts!

From our old postcard collection we are going back to 1954 to have "Fun all the time" at the Paradise Ranch in Buffalo, Wyoming ... 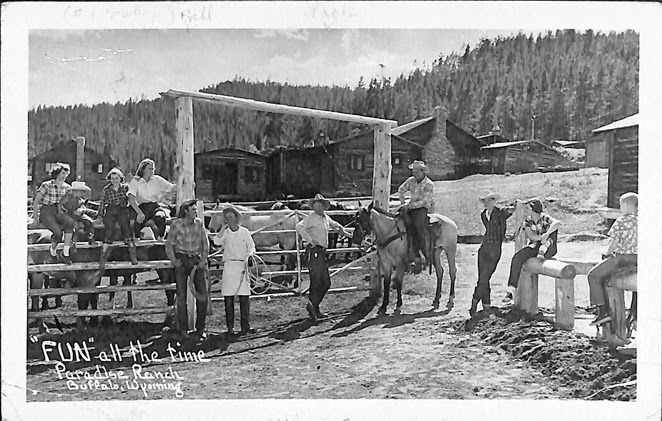 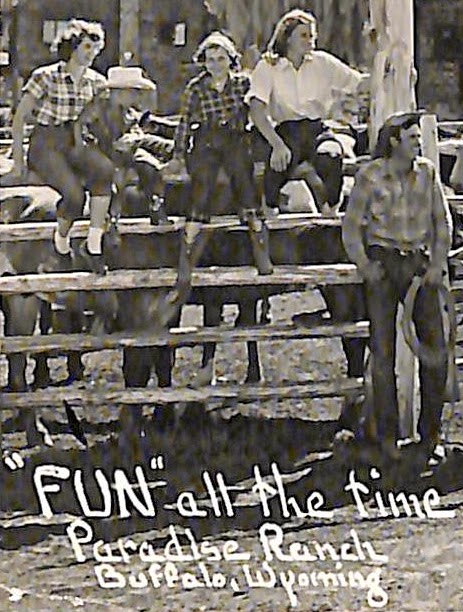 We posted another card from Paradise Ranch last year in this post.

Paradise Ranch is still in operation ... check out their website here.

Linking up today with Good Fences ... thank you Tex!

Does the thought of a vacation at a guest ranch in the USA Rocky Mountains sound interesting to you?

"Gustav Krollman was born in Vienna, Austria in 1888 and trained to be a portrait painter at the Academy of Fine Arts in Vienna. In 1923 he immigrated to the United States and settled in Minneapolis, Minnesota. By the late 1920s he was working for the Northern Pacific Railroad as an artist for the railroad’s promotional travel poster campaign specifically to create posters that would attract visitors to the scenic locations along the rail route."

The posters were often reproduced on postcards like these featuring Lake Pend Oreille, Idaho. We have two cards with the same view but printed at different times. First, the older card ... 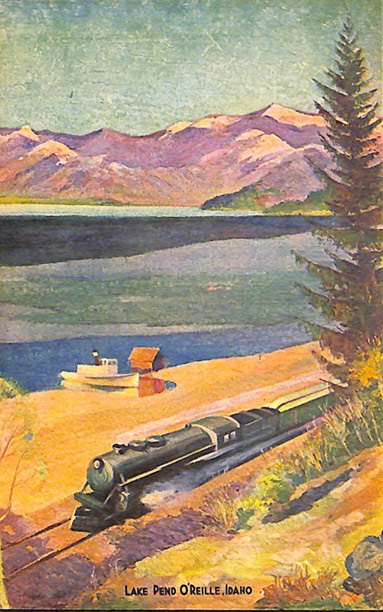 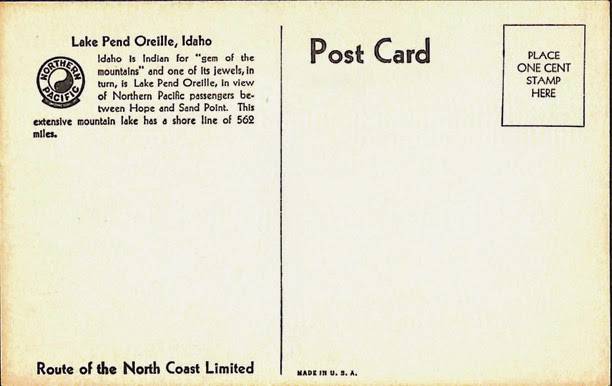 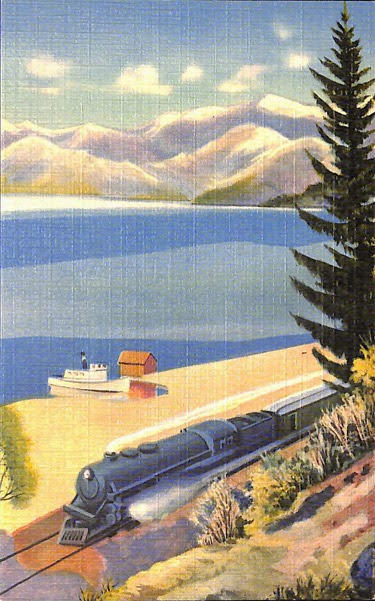 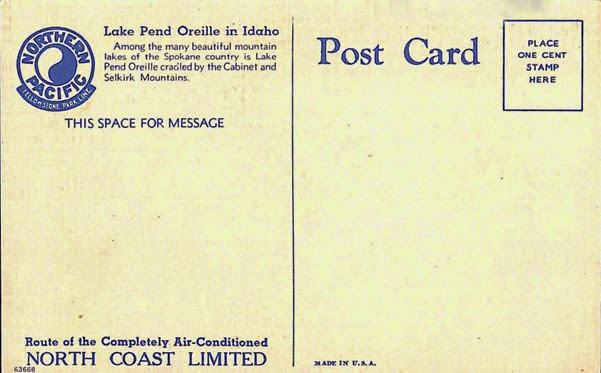 Compare them side by side to see some interesting differences. We wonder if the artist was involved in the changes made to the newer print or if that was all left up to a technician at the printing plant. 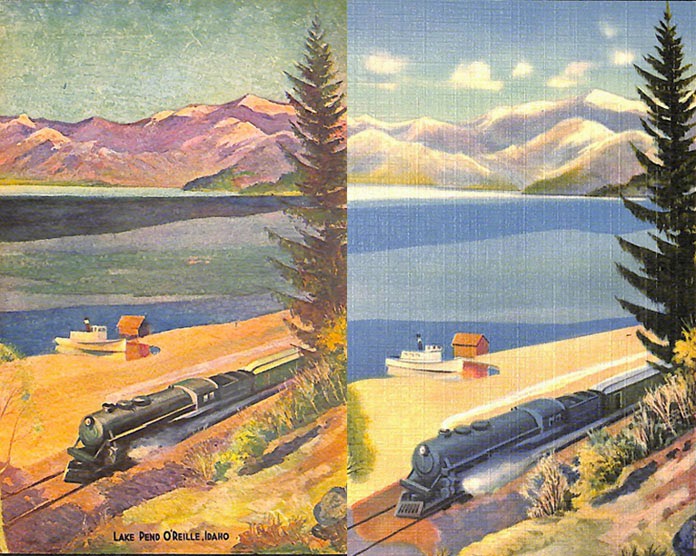 A few favorite photos of old cars in Yellowstone National Park, mostly 1920s. Were these the "good ol' days"? Click on photos for larger view.

From our collection of old postcards, please take a look at "A Daughter of the Rockies" published by Raphael Tuck & Sons, "ART PUBLISHERS TO THEIR MAJESTIES THE KING AND QUEEN." Although uncertain, we believe the date of publication to be around 1908. It was during this time period that the publishers introduced their series of post cards known as "State Belles".  The front of the card features a portrait of an attractive young lady holding a mining pick over her right shoulder. In the lower left corner we see the State of Montana logo, "Oro y Plata" (Gold and Silver) and an image including a mining pick. At the very bottom we see the title of this card. How do you like this card? 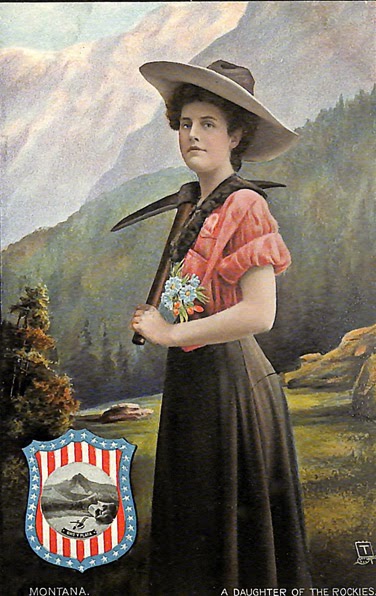 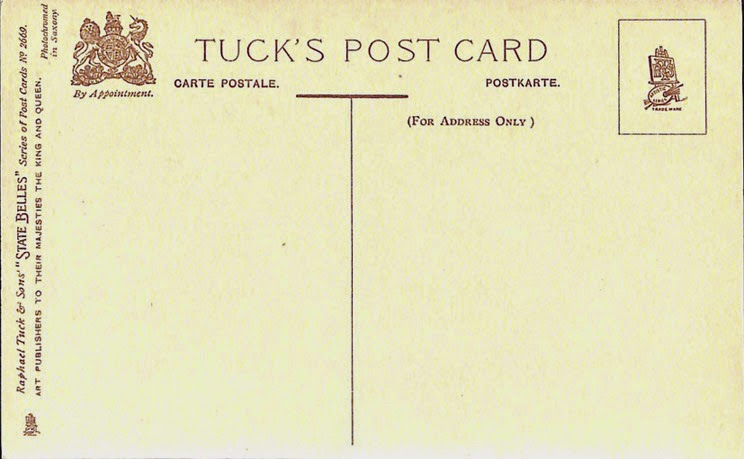 Since this card is one of a series, "State Belles", we are inclined to believe there was a card for each state, and, we can imagine there were card collectors who wanted the full set. In a quick search of Google Images we found about a dozen of the other State Belles, but, sadly, not one of our own state, Washington.

If you like this card, and are curious about the publishers, yes, you can read all about them (and possibly even more than you want to know) on the web here.

Camp Lincoln in the Rockies, a folded brochure and envelope published in 1927 by the Northern Pacific Railroad, to encourage travel to Camp Lincoln, a summer guest ranch, located in Lincoln, Montana. Be sure to click on images for larger views. 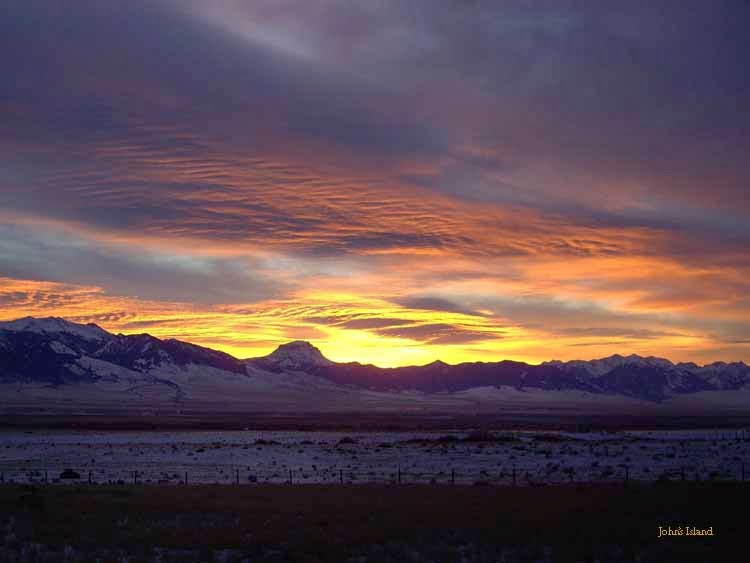 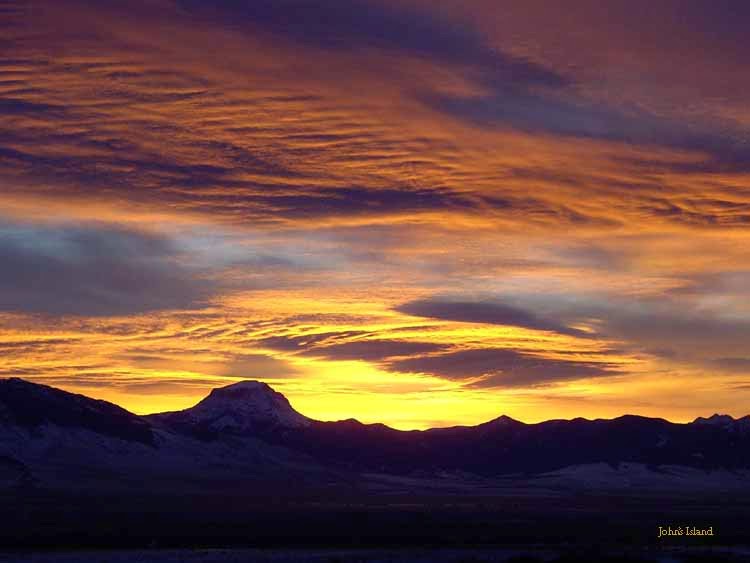 So far, in 2015, we haven't seen a really colorful sunrise in Seattle. (Yes, we might have been oversleeping, so we're not saying it didn't happen.) We thought ... Well, this is what the archives are for! We decided to start looking back before we were blogging ... These pics are from December, 2006. The location was southwest Montana near Yellowstone National Park. In the first picture you can see the slight snow cover ... it was a cold morning as we remember it. The mountains are known as the Madison Range.

Update on Yesterday's post ...
"Thank You" to those of you, especially DJan, who tried to decipher the shorthand. At least we know it is "Gregg Shorthand" and can do some research with that in mind.

Update on Recent Weather ...
One of our local TV weather persons referred to our recent weather as "The Winter that Wasn't". It has definitely been unusually warm in Seattle with only a very few days of cold. Of course, it isn't over yet! : - )

Maybe you can help us understand a little more about this old postcard.

This card was probably published in 1910 or 1911. Passenger rail service was just getting started on a new rail line from Chicago to Seattle across the northern part of the USA. This rail line had several names over the years, but for a short time, around the time this card was published, it was called Chicago, Milwaukee, and Puget Sound Railway. The card features an eastbound train arriving at the brand new Missoula, Montana, depot. One of the things we like about this card is the "sepia tone" ... the brownish tint that was common in some of the vintage photographs of this period. It is printed on heavy card stock, which even today would be considered high quality.

The card was mailed on January 19, 1912, to Miss Viola Jones, Grass Valley, California. The sender had some of the best handwriting we've ever seen as evidenced by the address part of the card, HOWEVER, the other half, the correspondence portion, is a mystery to us as it is written, we think, in shorthand. The art of shorthand may have just about disappeared today, but in 1912 it was used as a way to write down a lot very quickly. For example, it was used to record what people were saying in meetings. We copied the correspondence part of the card and turned it a little sideways to make it easier to read ... Can you tell us what it says, or, at least, what it is about? 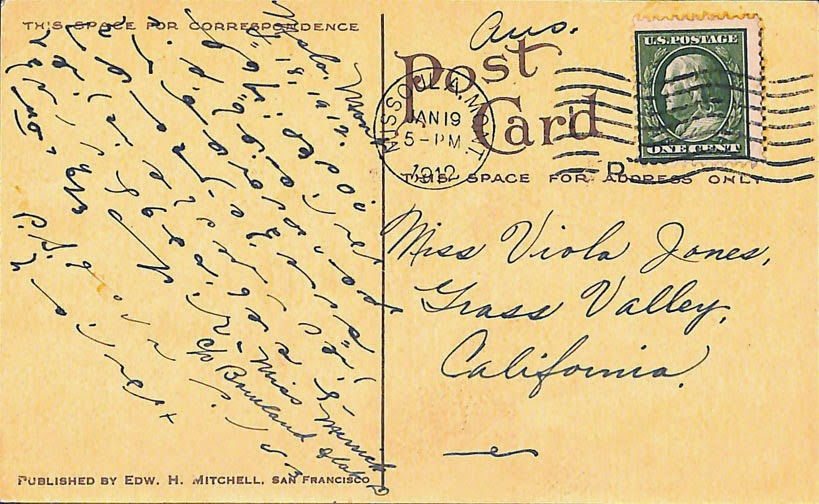 It's 1910, or there about, and one of the new rail lines from Chicago to Seattle has just opened for passenger service. Of all the stations on the new line there is only one natural log depot ... it's in Musselshell, Montana. Here are 4 cards featuring the station ... 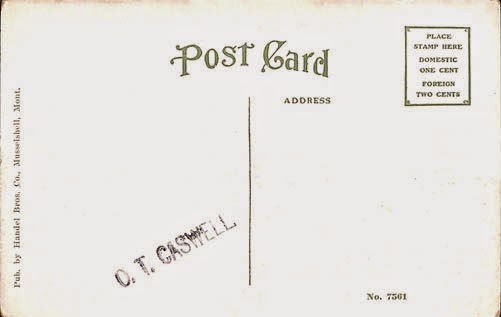 Compare the following to the first card. It seems to be the same picture, with some color added and minus the smoke from the train's engine. No, we didn't do it with photoshop, but some postcard publisher must have back over 100 years ago. How? ...  We don't know. 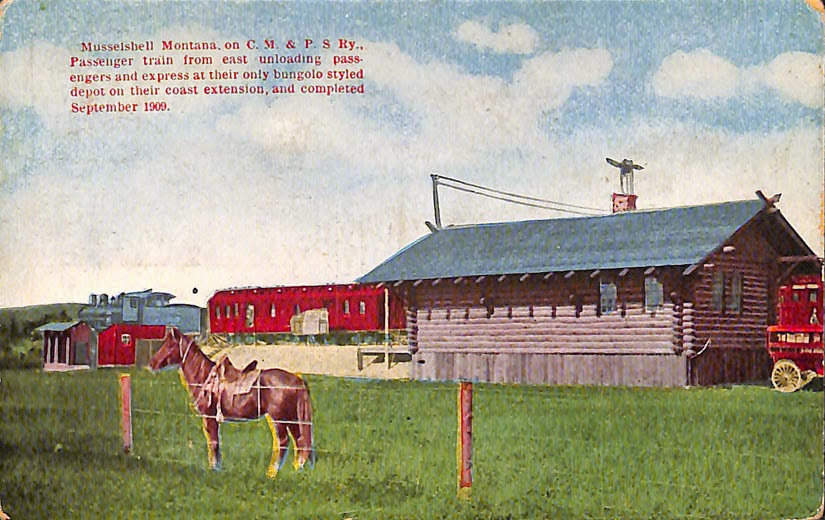 Our guess is ... the horse probably was the photographer's. A basic black and white photo must have been hand colored to produce the cards. 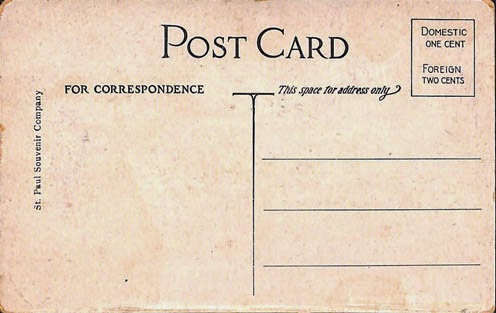 The first two cards featured a view of the depot from the back. The following two are views from the front. One thing is for sure ... We don't really know what the true colors were. 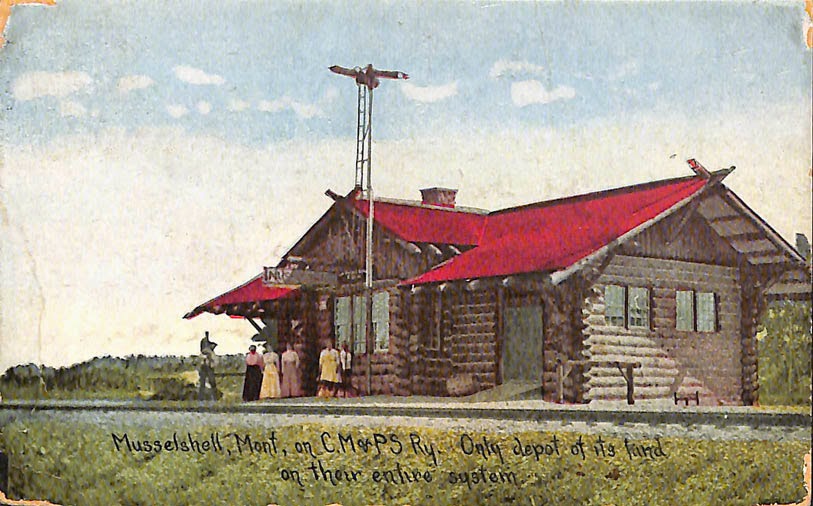 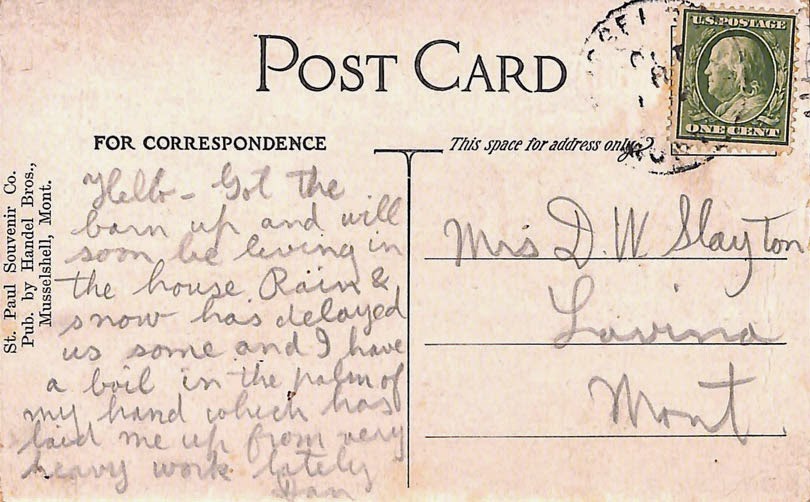 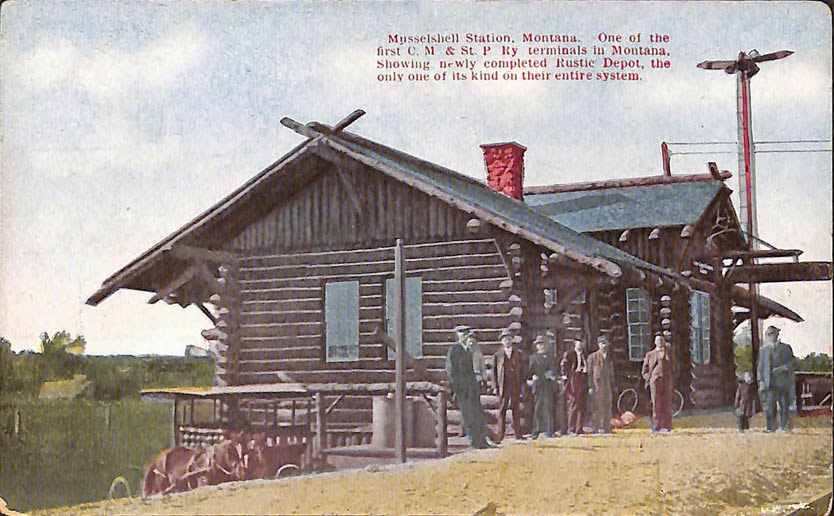 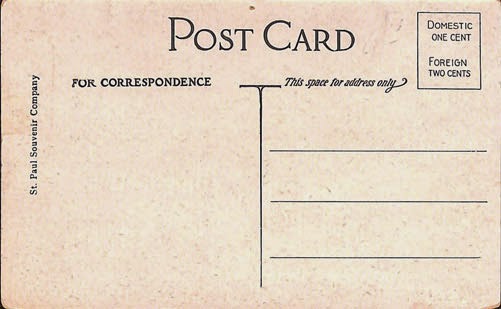