My post today is about Yellowstone National Park and includes photos from my visits, plus items from my collection. For years, I've been collecting old stuff related to YNP, especially if it has something to do with the railroads that served the Park in the first half of the last century.

Yellowstone Park is one of my favorite places. I've visited there many times, taken many pictures, and  now collect vintage memorabilia related to the Park. The old postcard above shows a group of tourist leaving the Northern Pacific Railroad station at Gardiner, Montana, aboard a stagecoach on their way into the park for a tour. They have just stepped off the train after what might have been a long journey from places all over the world. The photo below is a scan of a very old glass slide (commonly known as a lantern slide) showing a train at the depot in Gardiner. 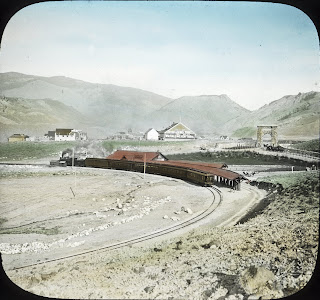 If these tourists were entering the Park in the summer of 1903 they would have passed through the entrance arch dedicated by President Theodore Roosevelt in April of that year ... 108 years ago. (If you're into history a great article was written about the arch's history by Lee Whittlesey and Paul Schullery and can be found at the following link -- note: allow several seconds for the article to download -- it's worth the wait -- The Roosevelt Arch ) 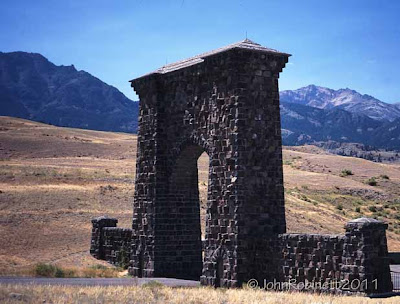 The close-up above shows the cornerstone. My photos in this post are from visits about 10 years ago and were taken with a medium format camera using FUJI color transparency film.
The tour in 1903 would have been guided, of course, and perhaps the stagecoach driver or tour guide would have handed each traveler a little booklet called "Coaching Through Yellowstone Park."

This little booklet is in my collection. Let's take a look inside.

Compliments of Yellowstone Park Transportation Company. A sketch of a soldier on horseback is followed by a brief introduction: "The Park is under the control of the Government. Fort Yellowstone, the name of the post, is located at Mammoth Hot Springs. The soldiers patrol the park daily and during the park season a summer encampment is maintained at the Lower Geyser Basin. Infractions of the superintendent's rules are severely punished."
Sounds like they were serious.
A further look into the booklet shows the distances to various points in the Park.

The sketches are neat. Of course, in 1903, automobiles were in production in the world, but there weren't many and none were allowed into the Park. The way to see Yellowstone was on the stage, on horseback, or walking. Yellowstone is located in the Rocky Mountain part of the United States, and in the early 1900s almost all tourists arrived via train and toured via stagecoach.

As the stage entered the Park it would pass through the "Golden Gate." 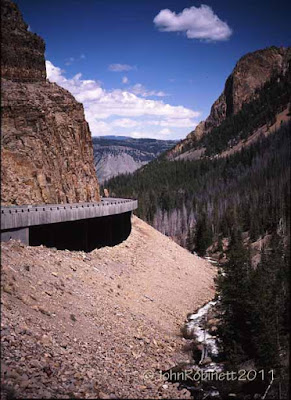 There is a sketch of the Golden Gate showing a rider on horseback passing through. There is also some info on additional places to be visited. The big concrete road in my picture was just dirt in 1903. They say the dust was something to deal with.

Some of the sights they might have seen and why Yellowstone is called "Wonderland." 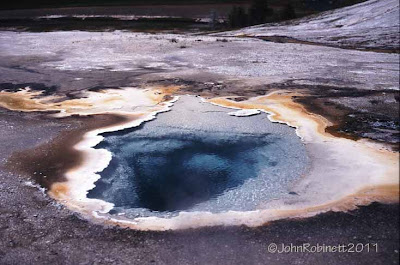 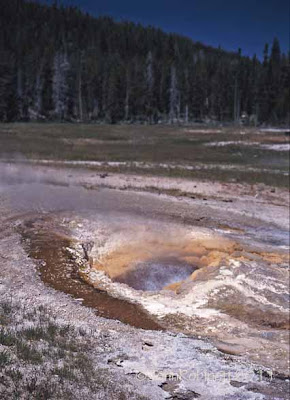 Apparently, one of the traditions was to have everyone in your coach sign your booklet.

There are quite a few signatures in the book, so perhaps it included more than just one coach. I like the last signature on the page below ... Frank B. West, Columbus, O.  In the description of "Hotel Accomodations" it is noted: "The uniform rate at Park hotels for stay not exceeding seven days is $4.00 per day. After seven days $3.00 per day."

The scenery really hasn't changed that much since 1903. 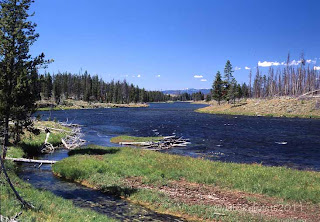 Steam escaping from an old geyser. The alignment of the clouds in the sky was coincidental and has nothing to do with the geyser. But I like the way it looks. The rocky substance that looks a bit like a volcano is called geyserite and is produced by steaming water and minerals coming out of the geyser. 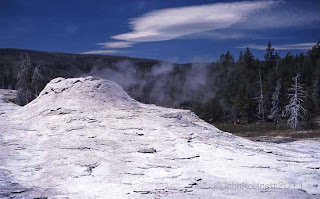 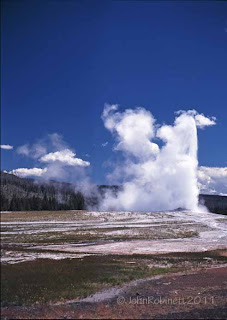 The little booklet, like today's modern guide book, includes a "Geyser Table" showing the frequency of eruptions. Notice the sketch ... today visitors are not allowed to get nearly so close to the geysers.

The 1903 trip through the Park will conclude in the next post on John's Island. Hope you enjoyed this part and thank you for visiting!
at April 08, 2011