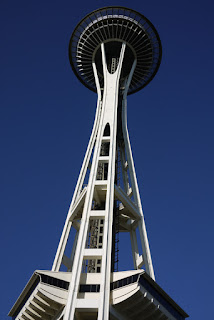 In 2012 the Seattle landmark Space Needle is celebrating its 50th Anniversary. It was built for the 1962 World's Fair. Yes, we were there in 1962 and we returned yesterday, February 4, 2012, for the first of our visits in the Anniversary year. A quick trip to the O (bservation) Deck will set you back $19. Well, after all, you'll be going up 520 feet. 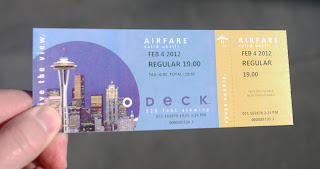 Although it does rain EVERY day in Seattle, there are rare moments when sky clears. We could look over Lake Union and see the Cascade Mountains in the distance.  [By the way, be sure to click on photos for a larger view.]  Yes, that is the Needle's shadow at the bottom of the photo below.  We have heard that if you can see the Needle's shadow on February 4, winter is over. We'll see about that. Incidentally, the large buildings at the center bottom of the photo are the new home of the Bill and Melinda Gates Foundation. 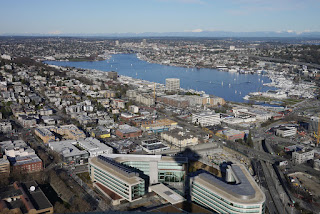 To the west of the city we have the Olympic Mountains on (yes) the Olympic Peninsula. The mountains are in a range of approximately 40 to 60 miles from downtown Seattle. The body of water is Puget Sound.

In the scene below we see Puget Sound in the sunshine. Yes, rare indeed! 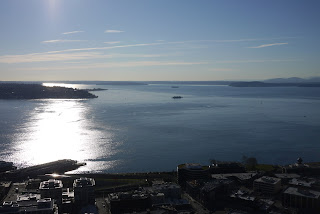 Lastly, a view of the city with Mt. Rainier in the background. 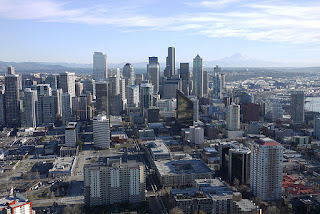 As always, thank you for stopping by John's Island. A special hello to our followers -- hope you are all well and having a good winter.
at February 05, 2012