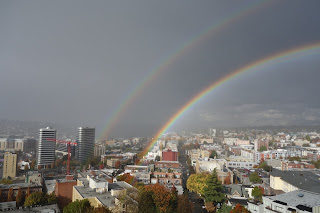 Sometime Tuesday afternoon I realized it was time for my 15-minute break and slipped into the large recliner in John's Island Headquarters Office.  A gentle rain was tapping on the window.  Hopefully the ensuing snoring sounds were not disturbing to adjoining offices.  Seemingly not too much later, a bright stream of light blazed into the office strong enough to awaken a sleeping giant.  Of course the sun had broken through the clouds but it was still raining lightly.  Realizing this should be the perfect combination for a nice rainbow, I grabbed the camera and proceeded to the Observation Deck. That is where I snapped the photo (above) of the double rainbow.  I thought it was interesting to note that the sky between the rainbows looks somewhat darker than the rest of the sky ... is that due to the camera (exposure, etc.) or did it really look that way?  Next time I see a double rainbow I will try to notice.  Anyway, the rain, the sun's brightness, and the angle all need to be just perfect for a strong double.