Those of you who have been following us for a while may recall a post featuring a most unusual fence, in the United Kingdom, constructed of hazelnut with a look similar to that of some wicker baskets. (See our archives for June 4, 2015) The photos were sent to us by a follower in the UK for us to share on John's Island. The same gentleman recently sent us more pictures of a fence fit for a Queen. The fence is on the property of Sandringham House which is a country house on 20,000 acres of land near the village of Sandringham in Norfolk, England. The house is privately owned by Queen Elizabeth II.

A brochure about the property has the following details about the fence:

"The gardens of Sandringham House are entered through elaborate wrought iron gates, of a flower and leaf design, known as the Norwich gates, they were given as a wedding present to the Prince and Princess of Wales in 1863 by the County of Norfolk and the City of Norwich and are the work of Thomas Jekyll."

Linking up with Good Fences and thanks to Tex for hosting! 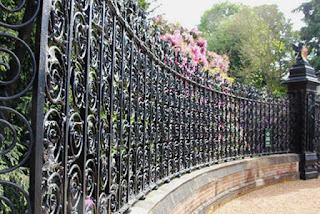 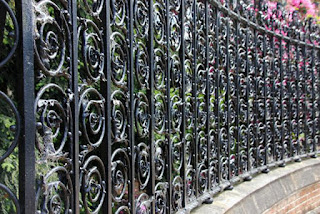 To our friend and follower, Richard, we say thank you very much for allowing us to share your photos on John's Island!