Are you a collector?  If so, you will know that putting together a collection is fun.  It's a hobby and can be challenging and take up a lot of your time.  John collects old stuff from Yellowstone National Park, the "oldest and best" US National Park.  You may be saying, Why on earth would John do this?  Well, the full answer is too long to post here, but the short version is this:  John (as you know, somewhat OLDER) first visited the Park in 1989, one year after the "great fire" that destroyed large areas. To visit a place like that, and despite the devistation, to think it is one of the most fascinating and beautiful areas you've ever seen ... well, that is impressive! And so, John fell in love with the Park and started visiting it every summer (and a few winters as well).  Now, put this together with another of John's fascinations:  railroad history.  Yes, John is old enough to be INTO history!  As you start studying Yellowstone, you will find that in 1872 President Ulysses Grant signed legislation creating the world's first national park. Imagine that in those early years the only way to see what all the fuss was about (folks were calling it "wonderland") was to go on your own two feet, ride horseback, or, if you were well-to-do, take the stagecoach. Not too many folks could do that. However, starting in 1883, the Northern Pacific Railroad installed a branch line to within 3 miles of the Park's northern entrance.  Over the next fifty years, or so, the railroads (NP and a few others) became the way that millions of people discovered Yellowstone for themselves. That whole process created a lot of really cool and interesting promotional materials:  postcards, brochures, maps, luggage labels, window stickers, guide books, etc.  So, in summary, that is the kind of stuff that John likes to collect.

Now, again, if you are a collector, you will know:  yes, it is fun to collect, but you can only get so much fun out of looking at all this stuff by yourself.  So, it is a good thing to SHARE and that is THAT is why John is posting some of his YNP collection on the Island. 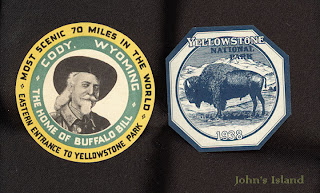 The old postcards (sent back when it only cost one penny to mail) are ofen fascinating.  If you can read the writing on the back of the card below, mailed in 1909, you will see that the person who sent it (from New York City) wasn't sure where the Park was located, or at least the mailing address.  It does appear from the postmark that it made it to its intended destination! 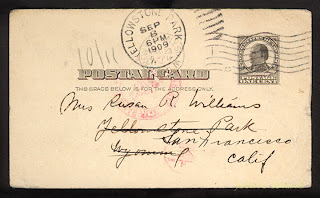 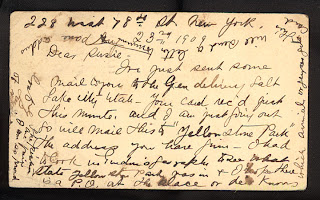 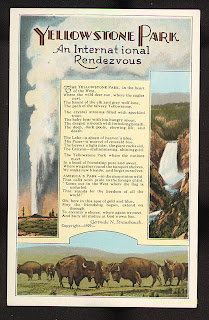 John likes the idea of YNP being a spot for "An International Rendezvous".  Just in case you can't read Gertrude N. Strausbaugh's 1929 creation on the card, we've typed it out for you below.


The Yellowstone Park, in the heart
of the West,
Where the wild deer run, where the eagles
nest.
The haunt of the elk and grey wolf lone,
The path of the silvery Yellowstone.

The crystal streams filled with speckled
trout,
The baby bear with his hungry snout,
The dragon’s mouth with its boiling breath,
The deep, dark pools, showing life, and
death.

The Lake – a sheen of heaven’s blue,
The Pines – a marvel of emerald hue,
The Geyser’s light mist, the giant rocks old,
The Canyon – of shimmering, shining gold.

The Yellowstone Park where the nations
meet,
In a bond of friendship pure and sweet,
Where we gather round the banquet shelves,
We make new friends, and forget ourselves.

AMERICA’S PARK –in the mountains wild,
That calls with pride to the foreign child,
“Come out in the West where the flag is
unfurled
That stands for the freedom of all the
world!”

Oh, here in this spot of gold and blue,
May the friendship begun, extend on
through
To eternity’s shores, where again we meet,
And bury all malice at God’s own feet.