For the two pictures below ... the first is an early morning shot looking west over Elliott Bay Marina to the Olympic Mountains in the distance. Notice all the sailboats in the Marina. The second shot shows how some of the sailboat owners decorated with lights for the holiday season. 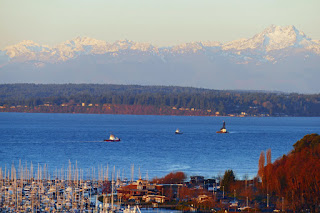 For more sky photos, check out Skywatch Friday. Thanks, Yogi, for hosting!

The first photo below might just as well have gone in the Sky Watch category. Well, we happened to be walking along the edge of Elliott Bay, on January 11th, when we saw the giant Hapag-Lloyd Leverkusen Express arriving. The sun was back there behind the clouds so the only possiblity was a shadow shot but we kind of like the way it turned out.  More info on Leverkusen Express

Going from large to small, the shot below is of the "Goodtime II" which is a tourist vessel operated by Argosy Cruises of Seattle. People pile on this little boat and cruise around the area for an hour or so and seem to love it.

We're sliding back to December for the shot below. It was a cloudy day but the colors on this container ship came through amazingly well.

It's time once again to join up with Maria's Postcards for the Weekend. The theme this week is "aerial views." It did take a while, looking through our collection, to find the card below. We sure don't have many aerial views. You won't be surprised our find features Seattle in the early 1960s. The card has a glossy surface which has deteriorated in the top corners over the years. The main feature of the card is, according to the description on the back, U. S. Highway 5. Wow, that's before it was called "Interstate 5"! The view is looking from the North, over Lake Union, the Space Needle (completed in 1962), and Puget Sound in the distance. The body of water that snakes around the bottom of the view is the "ship canal" between Lake Union and Lake Washington, which is off to the left of the view. Today, Interstate 5 is one of the busiest roads in the state and goes from border to border on the West Coast. The full description on the back of the card:  "A magnificent aerial view of Seattle from the North. From the two-level Freeway Bridge (U. S. Highway 5) which crosses over the University Bridge and leads the traffic toward downtown, one sees Lake Union in the foreground and Elliott Bay in the distance. In the upper center stands the 640-foot Space Needle with its eye looking toward West Seattle."

For more postcards with aerial views check out Postcards for the Weekend. Thanks to Maria for hosting.

While the USA has been hammered recently with cold, snow, and ice, here in Seattle we've had only one major snowfall and it happened, of all things, on Christmas Day. We could show you a lot of snow pics, but this one, of the tree in our front yard, kind of tells the story of how much snow we got. Guessing it was somewhere between 2 and 3 inches. Lots of snow people were constructed. Notice we were not gender specific ... thank you.

While we were looking through the collection for a postcard today we happened to see the ink blotter below. For younger folks out there who've never heard of an "ink blotter" they were handed out in the first half of the last century by merchants as a form of advertising. The one below is from the Cole Chemical Company, St. Louis, Missouri. The code at bottom right is "3-44-85M" which probably means 85,000 copies were printed in March, 1944. The "flu" is a big story in the USA this winter and several people, seemingly in good shape, have died as a result of the sickness. The Cole Company offered coated capsules in bottles of 100, and of all things, included a bit of opium! Notice the warning -- "may be habit-forming." By the way, when did we quit calling them "chemical companies" and start calling them "pharmaceuticals"?

Our closing thought comes from the Circling Year Calendar for 1917, which we posted January 15th (our previous post) and is titled, Contentment.  "The happy state of mind so rarely possessed in which we can say, “I have enough,” is the highest attainment of philosophy. Happiness consists not in possessing much but in being content with what we possess. He who wants little always has enough." Zimmerman

Thanks for stopping by John's Island. Wishing you all a good week ahead!

Looked out yesterday afternoon to find this yacht anchored near the Marina. MarineTraffic identified it as Bravo Eugenia. Google identified ...