Eagles at Last! and More

In our last post the spotlight was on vintage postcards from Yellowstone National Park featuring the Roosevelt Entrance Arch. The arch appeared in many images in addition to postcards, for example, the menu cover shown below. This was a menu used in the dining car on the Northern Pacific Railroad around 1915. If you missed our last post, please take a look here to get the background story on the Roosevelt Entrance Arch.

"Sunrise/Sunset" is the theme this week at Postcards for the Weekend. You won't be surprised at the card we selected to share. Sky View Observatory is atop the tallest building in Seattle and the photo was probably taken a few minutes after sunset. Check out the link up for more sunrise/sunset postcards and thanks to Maria for hosting! 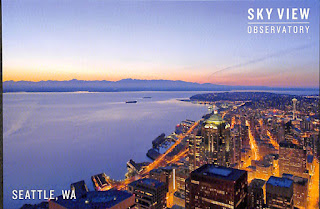 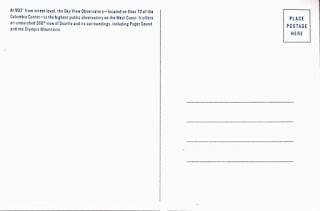 These photos are not going to win any awards. But here's the story ... There are a couple of eagles living right here in the neighborhood. They have been here now for at least two years and can be seen flying around anytime of day. On this particular occasion they landed in a tree about 150 yards from my window. The first two shots show the larger bird watching the other bird, in the third photo, as that one seems to be enjoying a nice lunch. It's rare to have the opportunity to snap a picture of them as they are rarely stopped anywhere long enough to get the camera ready for action. These birds seem to be doing just fine right here on the edge of a large metropolitan area. 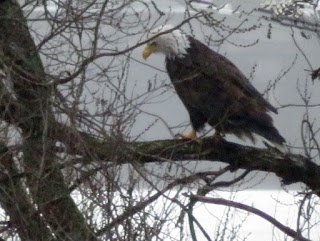 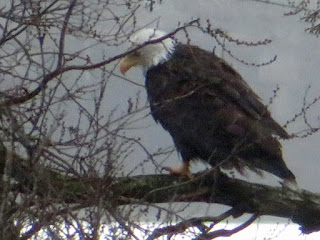 Love critters as much as we do? Check out Saturday's Critters! And thanks to Eileen for hosting.

Photos of the sky taken from my place in Seattle.


The next two photos are nearly identical and only a few minutes apart but I like the difference. I'm curious which one you like the best ... the first one with the little boat and its wake, or, the second one, with the still waters?


See more sky photos at Skywatch Friday. Thanks to Yogi for hosting!

And we can't pass up this sky spotting ... paragliding! These three are high over the Magnolia neighborhood and out over Puget Sound. Saturday afternoon, March 17th. 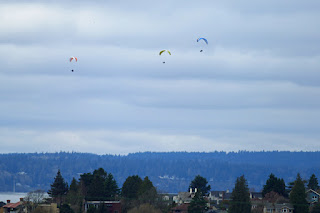 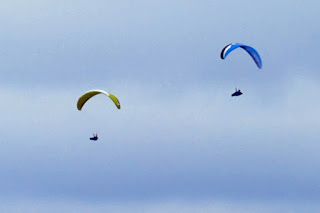 Here's a big Cosco arriving March 11th and some other maritime activity. We enjoy watching ships come and go. Seattle/Tacoma ports combined are the largest international shipping facilities in the Pacific Northwest.

Photos from a recent walk. Just keeping track of some new blooms in the neighborhood.

Closing Thought ...
Most of us spend too much time on the last twenty-four hours and too little on the last six thousand years.
Will Durant