On September 22, 2019, the MS Veendam arrived in Bar Harbor, Maine. This was my first opportunity to set foot in the State of Maine. After disembarking, via tender, we boarded a motorcoach for a short ride to Acadia National Park. Inside the Park, at Sand Beach, we started an appx. 2-mile walk/hike along the water's edge to Otter Cliff. The weather was perfect and so was the scenery. This was my first visit to Acadia National Park and I was impressed with the beauty. Acadia is known as the Crown Jewel of the North Atlantic Coast. Its one of the top 10 most-visited national parks in the United States.

The discovery of Acadia was actually somewhat of a surprise. Those of you who follow the blog here know that I am into walking. Holland America had offered a tour in Bar Harbor called "A Walk on the Beach." I had signed up for that without even realizing the "beach" would be in a National Park. So this was a very pleasant discovery. As one who collects postcards it's no surprise that I purchased the postcard below as a souvenir. 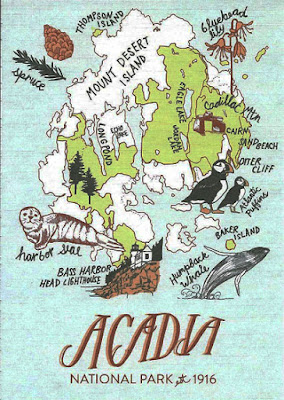 In my opinion travel is one of the best educators. I did not know that Bar Harbor, Maine, is actually on an island, Mount Desert Island, with only one state highway connecting it to the mainland. The population of Bar Harbor, according to the 2010 Census, was about 5,200.
at January 11, 2020

Looked out yesterday afternoon to find this yacht anchored near the Marina. MarineTraffic identified it as Bravo Eugenia. Google identified ...