Welcome to February.  (And Happy New Year to my Chinese friends if I didn't get in touch with you yesterday!)

Just in case you don't have a handy calendar available for this month, feel free to use the one below.  Yes, it's from 1997, but as they say, "it's the same, only different."  This particular calendar is the official United States Government version as provided to government offices all over the country.  Unique things about this calendar:  It gives you the day number of the year.  For example, today, February 1, is the 32nd day of the year. Also, down in the lower left corner, it gives you a handy thought for the month:  EEO is for everyone. And, if you are wondering why it says SEPTEMBER in the lower right corner, that is because September is on the other side of the page. Yep, efficiency matters!!!! 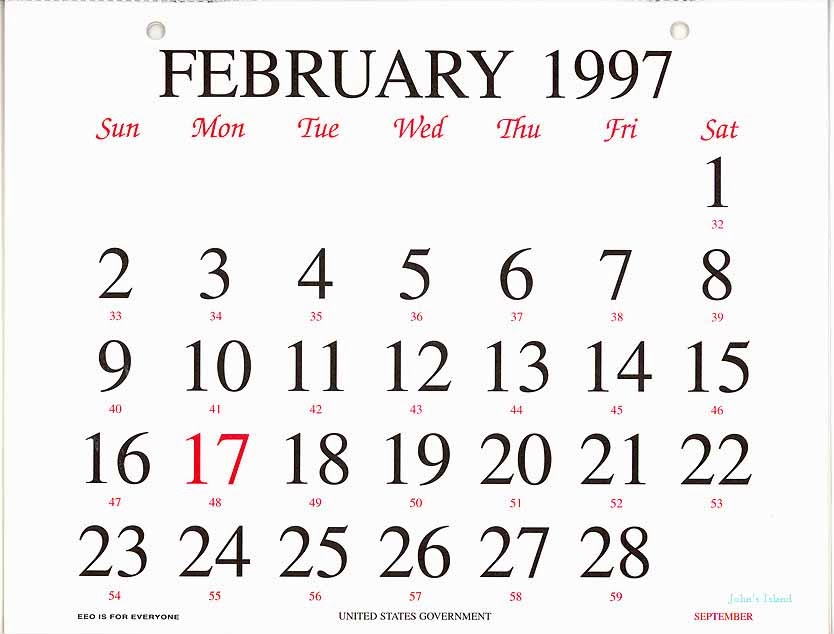 Here is a little more info, bordering on TMI, just in case you were not aware:  The calendar repeats itself!  Yes, it's true! We use what is known as the Gregorian Calender.  From Wiki we see that "The Gregorian calendar ... is internationally the most widely used civil calendar." And "Gregorian years are identified by consecutive year numbers. The cycles repeat completely every 146,097 days, which equals 400 years, and which also happens to be 20,871 seven-day weeks."  So, there you go.  We wonder if anyone in government has ever considered asking for the calendars to be recycled? Perhaps the year number at the top would be too confusing?  : - )