Surviving in wildnerness a 2020 fascination.

The fascination was sparked by watching the History Channel's ALONE, Season 7, as I described in a previous post**  (**See Note at bottom of this page.)  I Googled to see who had existed, for years, all alone, in the wildnerness. My interesting find was Richard Proenneke. In 1968, at age 52, Richard went to a spot, in wildnerness, on the shores of Twin Lakes, Alaska, and single-handedly built a log cabin. He lived there for most of the next 30 years. He had a unique combination of skills:  he was an excellent carpenter/craftsman, an avid and accomplished photographer, and he kept detailed, almost daily, journals of his adventures. 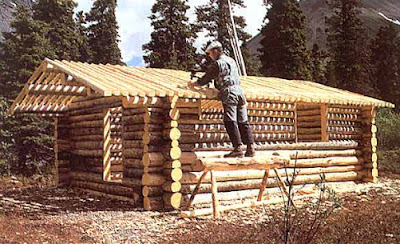 Some of Richard's photography was used in the creation of a movie, "Alone in the Wildnerness." Here is a portion of that via YouTube, which includes how Richard started construction of his cabin all by himself ... (9 min 33 sec via YouTube ... over 12 million views!) ...
There were 4 one-hour movies produced on Proenneke's life at Twin Lakes. The first movie, produced by friend Bob Swerer, was the movie mentioned above, Alone in the Wilderness.  "Alaska Silence & Solitude" is a follow up and here is a preview ... (16 min 45 sec via YouTube)
Don't miss the Grizzly Bears at 8:40

I purchased all 4 of the movies, on DVDs, from Bob Swerer Productions. They are great. Trying to put the DVDs on my iPad was a great challenge too. I got it done! My grandmother kept a daily journal for most of her adult life. I have a suitcase full of them. I believe I inherited her passion for journaling and that may be another reason I found Proenneke fascinating ... he kept detailed journals. He was a prolific writer ... his journals fill up 5 large books. When I have a spare moment I like to pick up one of these books and take a look at what Richard was doing on the same day years ago.

Closing Thought
The greatest thing you can do, in this world, is not contribute to the collective unhappiness in the world.
Eckhart Tolle
Thank you for stopping by John's Island.

**Note: I was a bit surprised that so many commenters on my ALONE post said they had never heard of it or didn't watch TV. The thing is, I don't watch that much TV myself. The serials that these TV networks come up with usually have little or no appeal to me. I guess I'm not your average viewer. 😊 Anyway, ALONE is not your ordinary TV. The video is all captured by the participants themselves and they have no crew helping them, camera or otherwise. In Season 7 they all had to survive for over 3 months using their own wits and skills. There may be moments that are a bit disgusting ... eating some nasty looking things, for example. But, overall, this is a great story of human endurance.