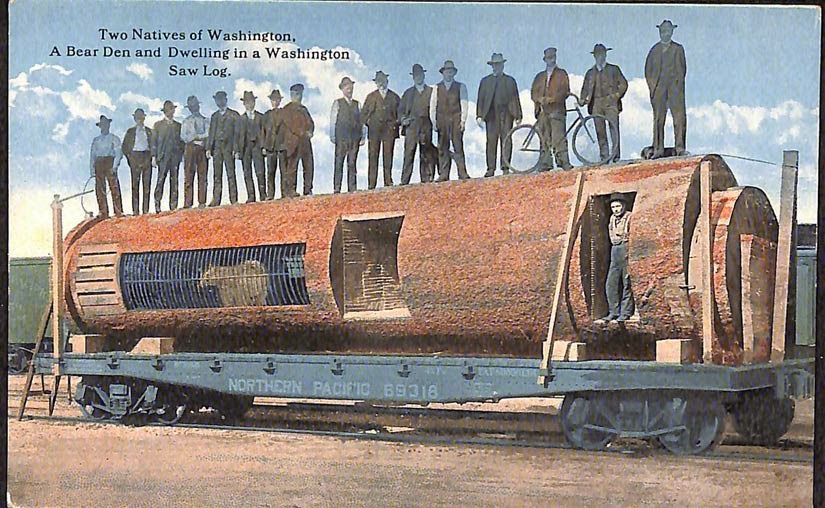 When was the last time you saw something like this? Sixteen guys standing on top of a log big enough to carve out a dwelling and bear den. The title is, "Two Natives of Washington, A Bear Den and Dwelling in a Washington Saw Log." The image, of course, is from our collection of antique postcards, most of which have something to do with railroads ... like this one having the log on a Northern Pacific RR flatcar.

This card evokes different emotions for us. For one thing, almost all the giant first-growth trees in the Pacific Northwest were logged in days when the mentality was that there was so much forest that they would never cut all of it. Sometimes it has been difficult for mankind to look into the future very clearly and consider the implications of their actions for future generations. On the other hand, we are pretty amused at what these loggers turned this particular log into. What's your guess ... is that a real bear in the den? Could this have been one of the first "man-caves"? Was this picture such an occasion that participants were asked to wear a suit, a vest, and a hat? We note the guy in the doorway of the log [and that may be the first time we've ever used those simple words in that order] is casual compared to the others ... maybe that was the way he dressed when he was "at home"?

For those of you who collect postcards, here is the address side ... 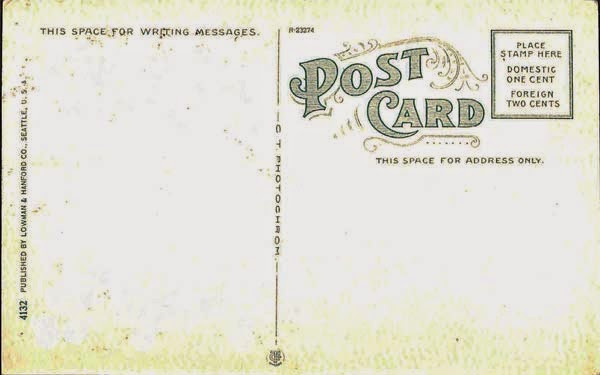 The card is unused which makes it a little more difficult to pinpoint a time of publication. The domestic rate for postcards was one cent, which was true for postcards until 1952. This card is well before that ... we are guessing during the teens or possibly as late as early twenties. It is identified as card #4132, published by Lowman and Hanford Co., Seattle, U. S. A. Just a few years ago we wouldn't be able to tell you any more about Lowman and Hanford ... it would take too much time to research. Today, a lot more info is at your fingertips on the World Wide Web ... we learned at this website that "The Lowman & Hanford Stationery and Printing Company, later the Lowman & Hanford Company, was a printing company and retail stationery business operating in the Pioneer Square area of Seattle beginning around 1885." On our card today there is another number, R-23274, which we suspect to be the stock number for the company that printed the card, C. T. Photochrom. Again, just a guess on our part.