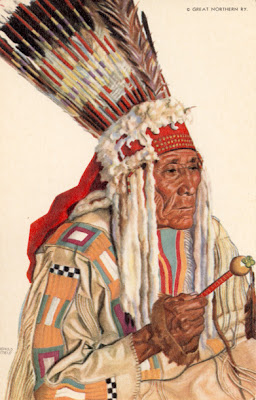 Our interest in trains recently took us to a "railroad show."  No, not a movie, but a place where folks gather who are interested in trains. Most are "modelers" or people who are into model trains ... like the ones kids get under the Christmas tree that go around in circles on very small tracks. Some people really get into this and create fascinating model displays. For example ... 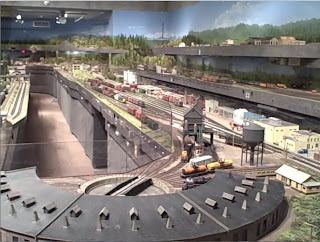 This photo was taken of the largest model layout in Washington State (to our knowledge). It is put together and maintained by the Puget Sound Model Railroad Engineers in the restored Union Station, Tacoma, WA.  Now, getting back to the railroad show ... it also is a place for collectors to find and/or exchange  memorabilia from railroads of the past. The early passenger railroads opened up the West and promoted its development. As a part of that they used some wonderful art in various forms to bring passengers aboard their trains.  And that is where the art of Winold Riess comes in.

Winold Reiss was born in Munich, Germany, in 1888.  By the age of 30 he had moved to America and lived in New York City. He was fascinated by the West, and especially the American Indians. In 1919 he traveled to Browning, Montana on the Great Northern Railway. While in Montana he produced art using brilliant colors in pastel and tempera, rather than traditional oils. This work led to his being commissioned by the Great Northern Railway to produce art they would use to promote their route into the great Glacier National Park area.

As a part of their advertising campaign the Great Northern produced sets of postcards featuring Riess's portraits of American Indians and at the railroad show we were lucky to find a set of these cards in excellent condition. There are 10 cards in the full set. If you like this card keep an eye on the Island here as more from the set will be posted in the future.

Today's card:  [Description as printed on the card's back] Angry Bull. (Turtle) famed throughout the Blackfeet Nation as a mighty hunter. He was also a skilled dancer and throughout his long years took a promininent part in the religious and ceremonial life of his people. The Blackfeet Indian Reservation adjoins Glacier National Park in the Montana Rockies, on the East, served by Great Northern Railway.
at July 02, 2014