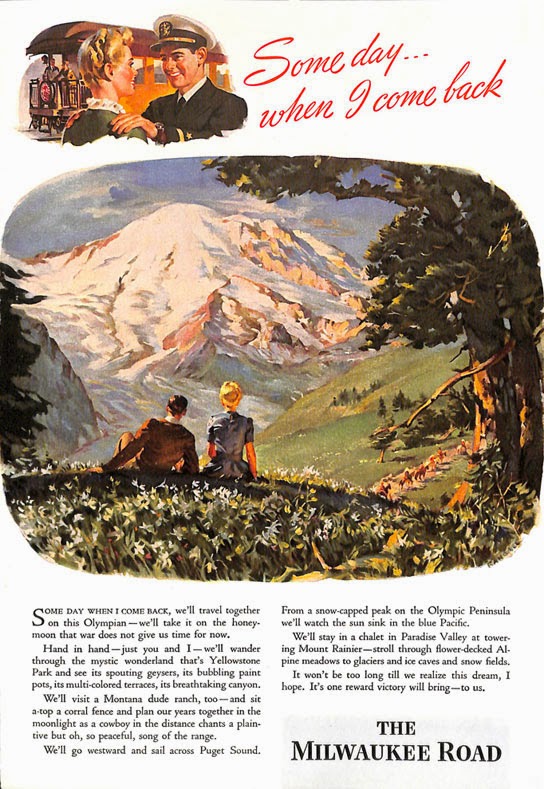 Excuse our weird title today. We are trying to think about how someone might search for this image. It's a cool vintage railroad advertisement with some well done art featuring Mt Rainier. This ad was published in 1944 by the Milwaukee Road (MR). The MR is no longer in existence, most of the western rails were pulled in the 1980s after the line declared bankruptcy. The MR is what is referred to by railfans as a "fallen flag". Back in the mid-twentieth century there were only three major railroads using a northern transcontinental route to serve the Pacific Northwest: Milwaukee Road, Northern Pacific, and the Great Northern. The latter two have survived but are now parts of modern, mostly freight, railroads. Of the three railroads, the MR had, arguably, the most scenic route, and was simply before its time by using electric power for much of the line from Montana to Western Washington. To make a long story longer, the MR was one of only five railroads that could claim they were providing service to Yellowstone National Park. (They were the Northern Pacific to Gardiner (previously Cinnabar), Montana; the MR to Gallatin Gateway, Montana; the Union Pacific to West Yellowstone, Montana; the Chicago, Burlington, and Quincy (commonly known as the Burlington) to Cody, Wyoming; and the Chicago and Northwestern via central Wyoming.) So, to summarize, if you're going to collect memorabilia with two key elements: railroads and Yellowstone Park, you'll need to focus on The Milwaukee Road.

Now, if you read all that, you know more than most about railroads and Yellowstone!